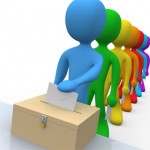 (June 9, 2010) – Voters in California have opted for a new ballot system that sends the top two vote-getters — regardless of party affiliation, or non-affiliation — into a final run-off. All the candidates in a primary election will run in the first round, and the top two vote-getters will then face each other in the general election. The new system will take effect in 2012.

While supporting such a move away from party-oriented, party-based politics, PROUT holds that eligibility should be more properly examined in the first place. And the popularity of a candidate securing the highest number of votes needs to be tested again if he or she polls less than half the total number of votes. In this test people must be able to vote either for or against the candidate. If the candidate polls more favourable votes he or she will be declared elected.

According to PROUT, candidates must also declare their policies in black and white. After an election, if it is found that a candidate is acting against his or her declared policies and this is proved to be the case in court, his or her election should be invalidated.

PROUT’s concept of democratic elections challenges the absolute of “adult franchise” as voters without socio-political consciousness weaken the governmental machinery. Democracy is a mockery in a country of uneducated people.

“In such a country cunning, fraudulent persons very easily secure or purchase the votes of illiterate people. Moreover, the general public in such a country is easily misled by the propagation of groupism,” PROUT founder P.R. Sarkar writes in Problems of the Day.

The success of democracy depends upon properly-informed voters. In the interests of public welfare it is desirable that uneducated and less educated people go through the necessary processes that would qualify them for participation in a more meaningful, purposeful democracy.

One thought on “California Goes for Progressive Voting”

Other material on OpEds, Political: