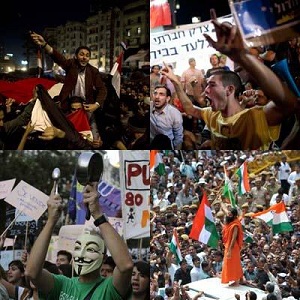 (March 2012) – President Obama’s healthcare law has sparked a lot of debate in the U.S., and predictably his critics on the right have used it to weigh in against the dangers of “Big Government.”

For many of Obama’s opponents, the possibility that the government might help people to get affordable medical care is a catastrophe signaling the end of “freedom” in America. “Once all of you are now looking to Washington to stay alive, they’ve got you,” says Republican Rick Santorum.

Santorum and others believe that an unfettered free market will provide the goods and services that people need, and that the main enemy of freedom and prosperity is the government. They have nothing bad to say about the rich individuals and corporations who acquire vast amounts of wealth while their fellow citizens are jobless, homeless and without medical care.

All of this is of course predictable and even understandable given the right wing’s belief in Adam Smith’s notion that the individual pursuit of selfish interests will bring about the well-being of society and their nostalgia for Thomas Jefferson’s America, when a weak government presided over a sparsely populated rural country.

What is surprising is to find the same kind of rhetoric on the left. I recently attended the Left Forum in New York City. The Left Forum is a yearly meeting of diverse individuals and organizations ranging from anarchists to liberals. This year the Forum was colored by the Occupy Wall Street movement, and the focus was on finding an alternative to capitalism. I somehow got the idea that for the Left, the enemy is clearly the capitalists, the one percent of the population which has amassed as much wealth as the remaining 99%.

I was wrong. I attended a panel meeting and one professor identified government as the “enemy.” When the question and answer period came I questioned him on this and said, “Aren’t the capitalists the enemy?” He replied by giving the example of the New England community where he resided, saying that its “town meeting” style of government is the ideal form of government and that big government is the problem.

Maybe local government in New England can be trusted to give provide a fair shake to everyone, but what about a local government in the Deep South, where African Americans have been tormented for years at the hands of their white neighbors? I didn’t get a chance to ask him this.

Actually, I shouldn’t have been surprised by the professor’s position. Karl Marx himself believed that the state would wither away in some distant future. Anarchists too, who were well represented at the Left Forum, also despise government.

So it seems that some people on both the left and right of the political spectrum have idealistic visions of society that prevent them from seeing things for what they are. PROUT presents a more practical answer to the problem. It calls for a democratic and decentralized economy but understands that a government composed of ethical and moral people is needed to make sure that fundamental human rights are upheld in all corners of a state, and indeed, in all corners of the world. This kind of government would not be an enemy of human social progress. Rather, it will ensure that noble ideas and policies come into fruition.