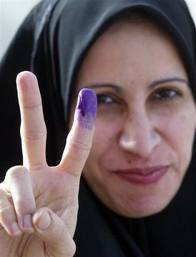 Ac. Krtashivananda Avt.
Two kinds of democratic states can be recognized in the Islamic countries. The basis of this distinction has to do with how comprehensively Islam is incorporated into the affairs of the state:

The compatibility of Islam and democracy

It is to be remembered that efforts to combine democracy with an all-out Islamisation program have failed so far.

The democratic ideal of a “government by the people” is compatible with the notion of an Islamic democracy. Deliberations of the Caliphates  were not democratic in the modern sense. Rather, decision-making power lay with a council of notables or clan patriarchs. They show that some appeals for popular consent are permissible within Islam.

In the early Islamic Caliphates, the head of state, the Caliph had a position based on the notion of a successor to Muhammad’s political authority, who, according to Sunnis, were ideally elected by the people or their representatives. After the Rashidun Caliphs later Caliphates had a lesser degree of democratic participation, but since “no one is superior to anyone else except on the basis of piety and virtue” in Islam, and following the example of Muhammad, later Islamic rulers often held public consultation with the people in their affairs.

Much debate occurs on the subject of which Islamic traditions are fixed principles, and which are subject to democratic change, or other forms of modification in view of changing circumstances. Some Muslims allude to an “Islamic” style of democracy which would recognize such distinctions. . Another sensitive issue involves the status of monarchs and other leaders, the degree of loyalty which Muslims owe such people, and what to do in case of a conflicting loyalties (e.g., if a monarch disagrees with an imam).

According to the Shi’a understanding, the Prophet Muhammad named as his successor (as leader, not as prophet; Muhammad being the final prophet), his son-in-law Ali. Therefore the first three of the four “Rightly Guided” Caliphs recognized by Sunnis (Ali being the fourth), are considered usurpers, notwithstanding their having been “elected” through some sort of consular deliberation. The largest Shi’a grouping — the Twelvers branch which rules Iran — recognizes a series of Twelve Imams, the last of which (the Hidden Imam) is still alive and the Shi’as are waiting for his reappearance. The second-largest Shi’ia sect, the Ismaili, recognizes a different lineage of Imams.

Since the revolution in Iran, Twelver Shi’a political thought has been dominated by the Ayatollah Ruhollah Khomeini. Imam Khomeini argued that in the absence of the Hidden Imam and other divinely-appointed figures (in whom ultimate political authority rests), Muslims have not only the right, but also the obligation, to establish an “Islamic state.” To that end they must turn to scholars of Islamic law (Fiqh) who are qualified to interpret the Qur’an and the writings of the imams.

Khomeini divides the Islamic commandments or Ahkam into three branches:

This last includes all commandments which relate to public affairs, such as constitution, social security, insurance, bank, labour law, taxation, election, congress etc. etc. Some of these codes may not strictly or implicitly pointed out in the Quran and generally in the Sunnah.

Khomeini emphasized that the Islamic state has absolute right to enact state commandments, even if it violates the primary or secondary commandments of Islam. For example an Islamic state can ratify (according to some constitution) mandatory insurance of employees to all employers being Muslim or not even if it violates mutual consent between them. This shows the compatibility of Islam with modern forms of social codes for present and future life  as various countries and nations may have different kinds of constitutions now and will may have new ones in future.

The Muslim scholar, philosopher and poet Muhammad Iqbal (1877-1938) claimed that Islam had the “germs of an economic and democratic organisation of society” and that this growth was stunted by the idea of Islamic conquest and Islamic empire. Islam thus became political Islam, and its democratic essence disappeared.

Today, two groups prevent the genuine reform movement seeking religious democracy. One group consists of those who think the less freedom a society enjoys, the stronger religion will be. They oppose the democratic process. The second group includes those who believe that religion should be put aside from the scene of life in order to establish democracy and freedom.

Two major arguments against the possibility of a democratic Islamic state are as follow:

Islamic democratic systems have the same human rights issues as other democracies, but some matters which may cause friction include appeasing anti-democratic Islamists, non-Muslim religious minorities, the role of Islam in state education (especially with regard to Sunni and Shi’a traditions), women’s rights.This is further complicated by the deriving of punishments from Fiqh, or Islamic jurisprudence, where, as in other legal systems, precedent assists the judiciary to come to a decision. Since the judiciary is not independent of a system of religious codes that are essentially the collective reasoning of often highly conservative scholars, the system is inherently conservative, and thus is less flexible and able to adapt to developing views of the subjects listed above.

To control political power, wealth and domination over women is the essence  of political Islam; spirituality is not an essential concern. They do not want encroachment over their space — economical, political, social or cultural. Cultural pluralism or political pluralism is a contradiction to political Islam. Hence in such a mental make-up democratic values cannot flourish.

One thought on “Islam and Democracy”

Other material on Islam, Political: