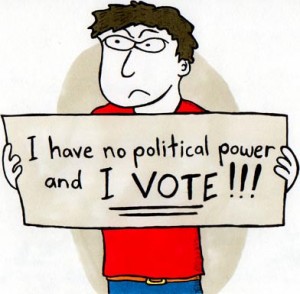 Democracy today is by and large identified with the representative party system. People have been given the right to vote for candidates selected by various political parties. The question is whether this is an optimal form of democracy – and do we have indications that it is about to change?

“How may we reduce and not increase differences between political candidates and the electorate?”

To most, participating in the election of representatives may appear to be essentially democratic. This feeling may be supported by the historical fact that general voting rights are a modern development. For instance, not long ago, voting was the sole privilege of the aristocracy and males. Even, in ancient Athens they did not always conduct straightforward elections but rather drew lots to decide on the distribution of certain powers.(1)

The question we may raise today is whether people (demo-) really rule (-cracy) or whether other forces are at work via a class of professional politicians.

Electoral rights in the representative system appear to be a matter of the right to consent, by voting, rather than one of actually ruling. By and large this is how democracy has been practiced in the West since the fall of absolute monarchies, the Enlightenment and the revolutions of France and the United States. The democratic element of drawing lots has not been practised since these momentous events.

Why has voting come to be seen as the democratic way to go? While drawing lots is random and takes place between the candidates, being subjected to popular voting requires a good deal more from those who want to participate in governance. As a political candidate one will be greatly benefited from having an outstanding personality, exceptional personal traits, ample funds, and available time. Not to mention today’s need for media skills.

Now, the ability to stand out from the rest is what results in an aristocracy. Hence today we have a superior political class with ample time, money, connections and education at their disposal. Apparently, members of this elevated political class have a greater chance than others to make an impression on the electorate.

One may have thought that with the introduction of universal suffrage the historical critique and concern about the aristocratic element of the political system became a thing of the past. Where there are two and more parties fielding candidates, several groups or sections of the populace are represented, one would think. Moreover, political parties are themselves mini-democracies that allow for the most suitable members to rise through the ranks and attain powers and positions for getting elected to high office.

If this was the case, then why is membership of political parties in decline? In the UK, 3.9 million people were members of the two largest political parties during the 1950s. Today, those two parties claim a total membership of 360,000 between them, that is a reduction of more than 90 per cent.(2) In Sweden, a country viewed by many as the most democratic and socially conscious of all, the number of citizens who are in a position to influence the selection of candidates within political parties has decreased from 19% in 1979 to less than 3% in 2011.(3) This trend seems to be universal; in recent decades all mature Western democracies have seen a drastic reduction of real political participation.

Needed political reform
One way of stimulating voter participation has been by opening up for individual candidates lists and giving voters the option to move an individual up or down the party list instead of having to vote only for a ready-made lists. While this measure may be said to increase electoral influence over party machinations, to some extent it does not truly address the problem of declining day-to-day political participation.

Rather, where membership is decreasing other elements are flowing in to fill the vacuum. In the absence of large-scale physical attendance – media, money and marketing have become increasingly important for political parties in order for them to maintain their popularity. When fewer people are directly active in the political system, we get what has been called an “audience democracy” where the media become the most important platform for the politicians.(4) The electorate becomes an audience to be persuaded about merits of candidates and demerits of opponents as portrayed in media.

Whether the party system has already played out its role or not is up for debate. In any case it may be useful to reflect on the merits and principles of a post-party system. There is no denying that democracy has changed over time and it seems likely that it will continue to do so in order to be of use to the people.

New merits
What would a workable alternative be like? If we go for a system based on individual candidatures we might again be moving towards a more aristocratic system. But assuming we do not want to be represented by parties and also that we do not want to draw randomized lots between persons, individual candidature might become one alternative. And if so, we would most probably have to define the basic merits that we want to see in a political candidate. In such a system, candidates would represent others in broad sense and not just stand for a constituency, a social group or some other grouping.

Moreover, if we are no longer looking for the merits of right-left ideology or social class we may just as well draw up a fresh set of points of merit: basic universal values, how well those values have been put in practice (such as genuine service to society), level and type of education, know-how, political-economic and social awareness, etc. Depending on how well the candidate meets such criteria, we may be able to determine whether he or she is a more or less suitable candidate.

The role of the electorate
On the other hand we have the electorate. Should voters also embody particular merits, other than attaining a certain age, that is? The electorate is really the other side of the coin. In an effort to nurture capable democratic leadership, having a more knowledgeable electorate becomes as important as having qualified candidates. After all, it is the people who elect leaders in a democracy, and we all want the best possible result. Do we not want an electorate who are knowledgeable, aware and one who are able to scrutinize arguments and see through political agendas?

In order to improve the quality of voters, society must first of all make high standard education available to all regardless of social status, gender or ethnicity. This education should emphasize a broader awareness of politics, economics and social issues. And if education and awareness form the merits which we use to judge a good electorate, then why not remove the age barrier? Why not let everybody who possesses these basic educational merits be allowed to vote and elect candidates?

The idea of a voter’s qualification based on knowledge and awareness might sound controversial and elitist. But one may also ask the question of how well the age qualification really serves democracy. As political philosopher P.R. Sarkar points out, applying the simple criterion of age results in that “people may cast their ballots without proper understanding and knowledge” while at the same time “educated and politically conscious people are debarred from voting because of their age”.(5) Would such an approach seem fair to young individuals armed with political awareness – would this be a good way to obtain high quality leadership?

In order to avoid elitist or aristocratic tendencies resulting from a voter’s test, strategies to diminish any such tendencies must be introduced beforehand. Clearly the most important prerequisite to be achieved is the ability of society to shoulder the responsibility of providing and maintaining the necessary level of education for everyone. Given that this kind of responsibility is achieved by society (and preferably formulated in the constitution) a requirement of knowledge does not have to be seen as a source of elitism or aristocracy, instead it can become a counterweight to such an issue.

The exact definitions of merits and demerits of candidates, the level and content of knowledge and awareness of the electorate, have to be more precisely defined according to the time and place and people. The essential issue is that an introduction of definite merits on candidates as well as on the electorate should not promote exclusion stemming from social class, gender or ethnicity. It should promote the welfare of the whole of society and not of an elite.

Let us make the electorate the largest political “class” ever in history – and see if that will reflect the quality of our elected leaders and of our democracy.