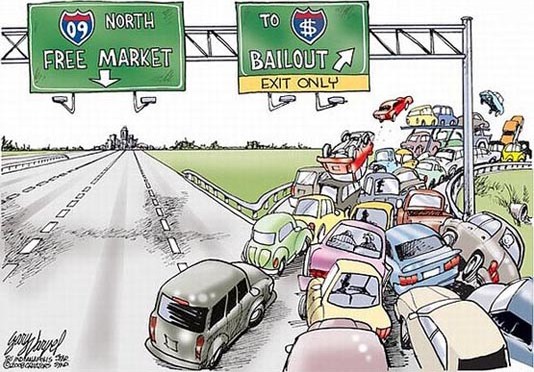 October 3, 2013 – This month marks the fifth anniversary of  the launch of America’s Troubled Assets Relief Project (TARP), a 430 billion dollars bank bailout program. This month also saw the US government stopping the wages of 800.000 government employees, thereby shutting down numerous public services in a move that is hitting the economy severely.

Do TARP and similar programs, such as the trillions of dollars provided to big banks through Quantitative Easing (QE), work as intended?

The major difference between the 1930s depression and the current financial crisis is that nowadays governments intervene to keep the top players afloat while leaving ordinary people to twist to the wind. Back then, it was the other way around.

Following the 1929 stock market crash, Western governments allowed overstretched enterprises to fall. Instead of aiding those that had generated the crisis – speculators and the banks that had funded them – governments launched large-scale public programs. Comprehensive public efforts, such as America’s New Deal, allowed ordinary people to gradually increase their purchasing capacity and participate in rebuilding the real economy, not hedging the speculative one.

The 3 Rs of the New Deal program were Relief for the Unemployed and Poor, Recovery of the Economy to normal levels, and Reform of the Financial System to prevent a repeat depression. It may be subsumed that the foundations of the modern welfare state in many countries today were laid in part by the introduction of such large-scale public programs during those difficult pre-war years.

Relief for the rich

80 years on, the US government launched TARP, a federal program providing failing top capitalist players with taxpayers’ money. At the same time much of the Western world practises the policy of QE.

Unlike TARP, which takes real money from the poor and gives it to the rich, QE involves spinning money out of thin air and giving it to large banks exclusively. Since 2001, Japan, US and Europe have systematically calmed the panic of very big banks in very big trouble by purchasing their debts to the tune of trillions of dollars. Private capitalism has gone state capitalism in a way that was previously reserved for communist countries.

How is TARP doing?

How does TARP affect morale among bankers? The Guardian put the question to top experts directly involved with TARP.

Sheila Bair, chair of the Systemic Risk Council and former FDIC chair:
I don’t want anyone who’s big to have a giant “put” on taxpayers. It’s problematic for big financial firms think that they can profit by taking a lot of risks, and if they lose money they can put it on taxpayers. There’s no more damaging and destabilizing message the government can send than this idea that if you’re big, the government will get you out of trouble.
Read more of what Sheila Bair has to say about TARP

Christy Romero, special inspector general for Tarp:
When their risky gambling went south these bankers lied, plain and simple. They hid bad loans and bad balance sheets through illegal accounting trickery. Some sought taxpayer dollars to fill in the holes on the fraud-riddled books. Some criminally concealed that the bank itself was funding their luxury lifestyles, believing they were entitled to the best even while they foreclosed on homeowners.
Read more of what Christy Romero has to say about TARP

Neil Barofsky, professor of law at New York University and first special inspector general of TARP:
Here we find ourselves, five years later, with banks like giant Frankenstein monsters, roaming the earth and wreaking havoc. Ultimately these giants might be Tarp’s biggest legacy … That’s not free market capitalism, that’s corporate socialism. Everyone’s inner capitalist should be cheering to break up these institutions.
Read more of what Neil Barofsky has to say about TARP

Anat Admati, professor of finance and economics at Stanford:
Tarp’s legacy is disturbing. Most of those who got into financial trouble because of “troubled assets” suffered severe consequences, and many innocent people are still suffering the collateral damage. Those who aren’t are the bankers who took excessive risks and the policymakers who did not control the system effectively. They would prefer us to think that everything is fine now, when in fact much too little has changed.
Read more of what Anat Admati has to say about TARP