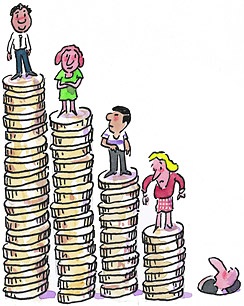 As you know, all the money for those starving entry level workers just keeps floating by them. It floats down–no, up–the capitalist river. Actually, the money keeps flooding all the way to the top of the money mountain. Up there in capitalism’s corporate heaven, up there where there’s plenty of dough to go around for all of us. Plenty of bucks for everyone to drive a Toyota Camry and live behind a picket fence in a 3 bedroom house. Plenty of dollars for the waitress with 3 kids and a husband with 2 jobs to go back to school and get that business degree. Plenty of that crispy, green stuff to clean up the environment, too.

So why isn’t it happening? Why isn’t all that money trickling, or streaming, down to those of us who desperately need it? Is it because of the low minimum wage? Is it because there’s no living wage? Nope. It’s because there’s no maximum wage. That’s right. What we really need is a maximum wage. A nicely designed cap on wealth. A redistribution of all that gold piled up at the end of the corporate rainbow. A reduction in the wealth disparity from around 2000-1 to, oh, maybe 10-1. You heard it. 10-1 max. The there’ll be a living wage for all of us. Then there’ll be enough money for the small business owners to pay their entry level employees a decent salary. Simply because the total economic pie–which now is mostly up there in the capitalist sky–will be more equitably shared. Thereby the purchasing capacity of all will increase dramatically. That means Bill Gates giving up all his billions to share it with all the waitresses on the Ashland Plaza (my hometown in Oregon, USA) and all the salespeople along Main Street and those down in the Railroad District.

While we are at it, what about a living rent? A living mortgage? A friend of mine recently overheard two women in the seats in front of him at the movie theater saying that a friend’s rent had recently been increased from $700 to nearly $1200. In Palo Alto, California, where I used to live, I heard of a guy recently whose rent went up from $1500 to $3000. That’s not a living rent for someone who makes 45,000 a year? That’s a living hell. (Just a subtle hint to all the well-to-do landlords of Ashland to increase their good karma and improve the overall welfare of our little town by lessening the economic burdens of the less-well-to-do by keeping the rents reasonably low!)

So, let’s have the Bill Gates’ out there do some real charity by giving us hardworking people a decent income. Let’s have the Rupert Murdochs’ out there pay our rent and our mortgage. How? By reducing their annual earnings from billions of dollars to, let’s say, a million bucks. That means you and I will still make about $100,000–which is enough to even buy a house here in Ashland. Sounds like a better way, to me. Why waste all that energy fighting over a petty few minimum or living wage bucks? Let’s go for the big guys with the big bucks instead. Let’s persuade them to share that pie they can only eat a few bites of anyway. Let’s just have a drastic reduction in the maximum wage. Then there’ll be plenty to go around for all of us. Then the minimum wage will dramatically increase without anyone even lifting a finger. No need to even dream about a living wage–we will all have one! The money left over, we can spend on cleaning up the environment and give our kids a better education. Yes, all that and much more with just these words: a maximum wage!