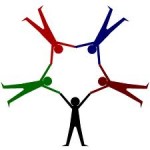 Ac. Tadbhavananda Avt.
The biggest problem the undeveloped and developing countries face is how to eradicate the poverty and starvation of their people. The developed countries have to some extent succeeded in providing the minimum guarantees of life by providing a measure of purchasing capacity. But still most people even there are facing chronic social insecurity. The cause behind the poverty of the poor countries and the social insecurity of developed countries is that all existing economic systems are centralized structures. In the rich countries the economy is monopolized by a few individuals, whereas in the communist world the state owned everything. Such centralized systems are characterized by ominous contradictions, and cannot eliminate either chronic insecurity or outright poverty.

It seems that people are not psychologically related with such exploitative systems. Therefore it will not be possible to eradicate economic disparity and social insecurity within a centralized framework. There is only one way to stop chronic economic exploitation and elevate the living standard of the people. That is to implement the policy of decentralized economy in all sectors of the economy. Proper planning cannot be carried out while sitting and resting in the affluent capitals of the world. Rather, economic planning should be prepared from bottom to top. From the bottom level the experiences, expertise and knowledge of the local people can be harnessed for the benefit of all members of the socio-economic unit.

All kinds of effective economic structures can be built up on the basis of a PROUT  decentralized economy. The decentralized economic pyramid will consist of a public sector, a dominating cooperative sector, and a small scale sector. The public sector will be responsible for for raw materials, energy, heavy capital goods, public transport, defence, etc. PROUT proposes that the public sector be controlled directly by the immediate government or any autonomous board. This economic structure will produce primary material for the other sectors to process. In the cooperative sector large scale consumption goods, light engineering goods, large scale agriculture products, etc. will be produced. The small scale sector will consist of proprietorships, partnerships, and small scale agriculture management.

Decentralized economies form the main economic plank in PROUT and will be one of the principal reasons for the success of the cooperative system. Indeed, cooperatives are the force that will be able to compete with the capitalist monopolization of local markets. Their agenda will include promoting the right of the local people to control the indigenous raw materials. In addition, people will not search for a job, rather the job will search for them. The production and distribution of large scale consumption goods will also be organized by the cooperatives, and large scale agriculture will be organized by the cooperatives too. Cooperative units of production will be owned by the workers, democratically controlled.

Adapted from A Look at Decentralized Economy and the Cooperative System, by Ac. Tadbhavananda Avt., PROUT Research Institute, Copenhagen, 1993.

Other material on Cooperatives, Economy: