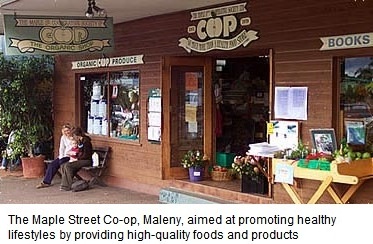 Kamala Alister
Maleny is situated 100 kilometers north of Brisbane on the Sunshine Coast Hinterland, Australia. It is surrounded by lush tropical vegetation, has stunning views of the Glass House Mountains, and overlooks the Pacific Ocean. It has a population of over 7,000 people. And it is a cooperative place.

Maleny has a long history of cooperative enterprise. On the 3rd May 1903, settlers started the first dairy cooperative in the region, the Maleny Cooperative Dairy Association. During its lifetime, it built 3 butter factories. In the 1940's, the community got together to build the Maleny Under 5's Centre Kindergarten in one weekend.

What Is a Cooperative?

Cooperatives and social enterprises are formed when a group of like-minded individuals join together to accomplish something that each acting alone would never be able to achieve.

Successful cooperative efforts are always born out of need. They cannot be imposed on a community — they have to grow from the energy and commitment of the local people themselves.

Cooperative efforts are different to traditional private and public sector enterprises. They represent a third way that integrates economic and social objectives. Unlike the private sector, which tends to concentrate wealth and power in the hands of a few, coops spread wealth and power to each member equally. Unlike government, which tends to be remote and unresponsive to the communities it is supposed to serve, coops are driven by their members and reflect their needs.

Cooperatives have a tremendous competitive advantage over both private enterprises and public enterprises: coop members have a personal interest in their coop's success. The members own the coop, so they are more likely to buy the coop's goods or use its services. Shares in cooperatives are not publically traded because the shares are owned by the members. The members themselves decide how to spend the coop's profits.

Maple Street Cooperative opened its doors on January 14th 1980, nearly a year after a small group of people met to discuss how to satisfy their need for whole-foods. The coop started by selling both whole-foods and produce grown by local farmers. Today Maple Street Coop operates an organic health food retail outlet in the main street of Maleny, is open 7 days a week, and has 450 active members. Although it functions as a consumers' cooperative, it still sells to the public.

The coop's policy is organic first, then local, then Australian. It does not stock any products that contain genetically modified material, nor does it stock products from companies that are regarded as exploiting people or the environment. It operates on the principle of consensus decision making.

For the last 6 years, the coop has made a profit. However, the coop is structured as a non-profit enterprise, meaning that the profits go back into the coop, to expand its services and develop its infrastructure, or into community activities.

At first labour in the coop was voluntary, but as the coop prospered, the number of paid workers slowly increased. Today the coop employs 11 part time staff and one full time manager. In the near future it will have paid off all its loans and own the coop premises.

The coop publishes a 16 page bimonthly newsletter that outlines current activities and brings information to members on subjects that are of special interest, such as the irradiation of food, genetic engineering, and microwave emissions. It produces 1,400 copies.

During its 22 years of operation, it has overcome several major hurdles. On occasions in the past, it had no business plan, operated at a loss, made poor investment decisions, lacked experienced financial management, and had to spend a lot of time resolving differences of opinion among the members.

Learning from experience, the coop gradually evolved a formulae for success. It now has a sound strategic and financial plan, regularly makes a profit, cultivates the support of both the members and the community at large, and ensures that the staff and management are honest, dedicated and competent.

Today the Credit Union has grown to have more than 6000 members, 14 paid staff, and $15 million in assets, and has purchased its own premises. People from all over Australia invest their money with the Credit Union, and about half the Credit Union's deposits come from outside Maleny. It is one of only a handful of financial institutions in the country that operate according to cooperative principles.

The Credit Union offers savings, cheque, loans, and term deposit accounts, as well as credit card facilities, and can arrange superannuation and various types of insurance for members. In addition, the Credit Union contributes substantially to the local community and leads its development.

Over the years the Credit Union has given out many small loans to local people who would not be eligible for loans from the major banks. This has helped many people buy land, build their own home, and start their own business. In dollar terms, 80% of the Credit Union's loans are housing loans.

The Credit Union's ethical activities include:

By the end of 2001, the Credit Union had provided finance for over 180 new jobs in 78 new businesses. Since its was established, it has reinvested over $50 million back into the local community.

Like the Maple Street Coop, in its early years the Credit Union went through periods of difficulty. However, improved planning and financial management overcame these problems. Today the Credit Union is extremely successful, principally because it developed the right balance of financial expertise and cooperative spirit.

The Up Front Club

Late in 1993, a diverse group of Maleny residents got together to form a cooperative club. The aim was to establish a licensed venue to eat, drink, relax and socialize. Today it is a place where the food is wholesome and inexpensive, the coffee is great, and local musicians and entertainers can gain exposure.

When the Club first started, instead of relying on voluntary labour it took on the financial challenge of paying wages to all its workers. But because it was under-capitalized, it was forced to take out a loan to pay for the lease. Although it had over 1,000 members, each year it sustained a loss. At the beginning of 2000, three directors took over the voluntary management of the Club, enabling it to remain in existence.

Then, on the 15th January 2000, the Club turned a corner. Over 100 members attended a special general meeting, talked of what the Club meant to them, and committed to regular voluntary work so that it could stay open. Since then, members and visitors alike have commented on the changed atmosphere in the Club. The financial position has improved markedly, and for the first time the Club has posted an operating profit.

Thanks to the support of the members, the Club continues to provide services to its members, their families and guests. It is open six days a week, providing healthy meals at reasonable prices. Members get a 10% discount. The Club also publishes a quarterly newsletter.

A share in the coop costs $10 and shareholders pay an annual membership fee of $30 per person or $45 per family. Members are encouraged to volunteer their time and support Club activities.

Over the years the Club has showcased a wide range of local talent, hosting everything from classical evenings to CD nights for teenagers. For many, it is the cultural centre of the Maleny community.

LEED is one of the most recent coops established in Maleny. It is registered as a workers' cooperative, and is dedicated to creating new businesses and jobs on the Sunshine Coast Hinterland. It employs 6 people.

LEED recognizes that most investment, jobs and economic development in the Sunshine Coast Region occur on the coastal strip. It believes that it is vital for the hinterland to develop its own jobs by creating viable small-scale businesses.

The seeds of LEED were sown in early 1997 after a local economic development forum. A group of local people came together to help people on the hinterland start their own businesses. The group organized forums on topics such as product development, marketing, financial management, and other business skills.

In July 1999, LEED and Maleny Credit Union entered into a partnership to develop a Peer Support Lending Scheme. Under the scheme, the Credit Union provides small unsecured loans for start-up businesses and LEED members mentor the new business people for the first 12 months of their operation. The Scheme is supported by a grant from the Department of Family and Community Services.

Maleny has one of Australia's most successful LETS schemes. LETS began in Canada in 1982, and was launched in Maleny in October 1987. There are now over 200 LETS schemes in Australia.

LETS functions as a cashless trading coop. LETS members trade their skills and provide services to each other without the use of money.

In Maleny members trade their products and services in the local currency, the Bunya, named after the local native pine nut, allowing people with little or no cash to participate in the local economy.

Maleny Wastebusters is a community based recycling coop which encourages people to reduce, reuse and recycle; to sort their rubbish; and to avoid buying poor quality and over packaged items. It employs 20 local people, and its slogan is: "Waste not, want not".

Barung Landcare is one of several hundred community based landcare groups throughout Australia. It is dedicated to empowering landholders in the local area to take ownership of environmental problems and their solutions. It provides a range of environmental services, publishes a bimonthly newsletter, and participates in the LETS scheme by accepting Banyas as part payment for the trees it sells. It hosts the annual From Chainsaw to Fine Furniture Wood Expo which promotes the sustainable harvesting of native timber. It also runs a successful nursery which propagates local native plant species which have not been genetically modified.

Crystal Waters is situated on 640 acres of land, and is the first Permaculture village in Australia. It incorporates 83 private residential lots, a village commercial centre, visitors accomodation area, and over 500 acreas of common land.

Manduka is situated on over 150 acres of land 6 kilometres outside Maleny. It is home to 18 adults and 6 children. The residents believe in living simply, sharing resources, reaching agreement through consensus, and managing their land in an ecologically sustainable way.

Prout Community is situated on over 50 acres of land, and is home to 3 families and a primary school run by the Ananda Marga spiritual movement. The Ananda Marga River School has over 100 students, ranging from kindergarten to grade seven. It employs 7 full time and 8 part time teachers, and 2 administrators. The curriculum emphasizes experential and whole brain learning, creativity, ecology, arts and music, all with a child centred approach.

Cedarton Foresters is situated on 200 acres of land 19 kilometres from Maleny. It contains 22 private residential lots and is home to 40 people. The community's main aim is the rehabilitation of the land. Although Booroobin Bush Magic is part of Cedarton Foresters, it is structured as an independently registered enviromental cooperative.

Other Cooperatives in Maleny

The golden rules for beginning a community economic strategy are clear:

Cooperative enterprises benefit a community in many ways.

Socially, they bring people together, encourage them to use their diverse skills and talents, and often provide them with the opportunity to develop new capabilities. They create a sense of belonging, build close relationships among different types of people, and empower them to make decisions to develop their community.

All this fosters community spirit. Working together, a community is able to accomplish much more than if the various individuals go their separate ways.

Economically, cooperatives produce various types of goods locally, provide a range of local services, create employment, circulate money within the community, and make the community economically self-reliant. Because cooperative enterprises are owned by the members themselves, the profits they generate stay in the local area. Cooperatives thus build the wealth of the community.

Cooperative enterprise is the socio-economic system of the future. In Maleny, that future is unfolding before us right now.