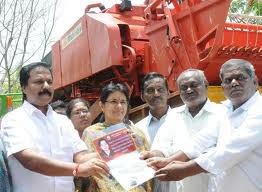 (16 May 1988, Calcutta) – Sharecroppers do not own land, but cultivate other people’s land for a share of the produce. Land usually is given to sharecroppers because it is too small for the landowner to make sufficient income from it. A sharecropper may arrange several hundred acres of land from different landowners. This system was first introduced seven hundred years ago. Sharecroppers are called bargadar or bhagcáśi in Bengali.

“Economic planning should be done on the basis of each block. The present boundaries of blocks should be reorganized or readjusted according to the fertility of the land and other factors such as topography and the similarities of the region.”

The cooperative system is far better than the sharecropping system. It can readily overcome the defects of the sharecropping system by properly utilizing agricultural land, increasing agricultural production and using modern technology. Cooperative members should elect a board of directors which will be able to supervise every aspect of production, thus increasing the out-turn. The maxim of agricultural cooperatives should be: “More production, more dividends and more bonuses.” Labourers will earn wages and bonuses. Wages will be earned according to the amount of labour done by the labourer, while bonuses should be paid on the basis of the net per annum profit of the cooperative according to the amount of a labourer’s net wage.

Economic planning should be done on the basis of each block. The present boundaries of blocks should be reorganized or readjusted according to the fertility of the land and other factors such as topography and the similarities of the region. For example, if most of the agricultural land in one block is fertile and the land in the adjacent block is mostly infertile, then the boundaries of these two blocks should be adjusted so that all the infertile land comes within one block. Planning can then be done for that block on the basis of the infertility of the land. A block-level programme can be easily taken to increase the productivity of the land, or to establish suitable agro-industries or agrico-industries for economic development.

In certain parts of India farmers do not cultivate fodder or keep land for rearing cattle, and this adversely affects the health of the cattle and decreases milk production. In the cooperative system a portion of the land may be kept for this purpose. Napier grass, which is fast growing, millet, jawar and non-poisonous khesári pulse can be grown for the cattle.

The varieties of khesári that are presently cultivated in India are very nutritious but contain poisonous alkaloids which cause paralysis in the lower limbs of both cattle and human beings. These poisonous alkaloids reside between the skin and the outer portion of the pulse. They can be easily eliminated if the pulse is soaked in water overnight and the following morning the outer skin is removed by rubbing the pulses together. The inner portion of the pulse can be safely eaten by both cattle and human beings.

Other material on Cooperatives, Planning: