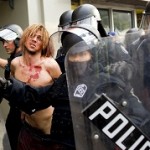 It is fair to say that leaders at the G20 summit in Toronto agreed to sacrifice the welfare of ordinary people world wide for the sake of saving a global economic system that increasingly favours only a very few. National budget deficits were to be cut in half by 2013.

President Barack Obama encapsulated the mood at the summit: “Together we represent some 85 per cent of the global economy; we have forged a coordinated response to the worst global economic crisis of our time.”

The world leaders are on collision course with Third World-experts who hold that 35 years of economic and financial globalization have produced growing divergence, not convergence, in income levels, both between countries and peoples; widening inequality among, and within, nations; more concentrated assets and incomes; falling wage shares and rising profit shares; reduced bargaining power as a result of capital mobility alongside labour immobility of organized labor; rise in unemployment and the accompanying “casualization” of the workforce with more and more people working in the informal sector that have generated an excess supply of labour and depressed real wages. (Source: Dr. Ravinder Rena of the Eritrea Institute of Technology)

Ordinary people present in Toronto at the time of that summit expressed wild anger. We understand them. Globalization, designed as a platform of capitalist exploitation, will continue to speed up proceedings toward the fall of capitalism and the rise of whatever that will fill the vacuum it leaves behind — poverty, hopelessness, unemployment, social unrest, etc.