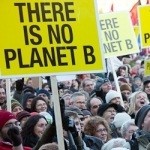 (On the first day of the Copenhagen climate summit, Dec 15, 2009) – The climate crisis is really part of a greater crisis which includes the financial crisis and the numerous political, social, cultural, existential crises that are now greatly troubling humanity. This compound crisis is the crisis of capitalism, which has reached a state of metastasis. It reproduces its disease everywhere.

Capitalism is no longer able to deliver. It only replicates its pattern of greed in any sphere around the world. The time has come to exchange the present ailing system for a new and better one. We need something that will be both more conducive to humans and the environment and offer  prospects of greater progress and genuine development for all.

Only a few but fundamental socio-economic changes are needed to remedy the ills of global capitalism. They will decentralise the world economy. Those changes include:

Local people should be in control of their own socio-economic destiny, because only they are in a position to develop their resources in harmony with their needs and with nature. Foreign interests have neither the sentiment, the know-how or the interest to take proper care of the environment in faraway places, but will only avail themselves of precious resources there for their own profit.

A political solution to the global climate crisis will continue to be largely ineffectual without a strong global body to enforce it. Such a powerful body in the form of a grassroots-created world government is not still in place. Unless a proper world government based on a global moral determination to safeguard the socio-economic rights of everybody is in place, no political effort based on regionalism, internationalism or any other partial perspective will work. A world government is a must for the global environment.

Dr James Hansen, head of NASA’s Goddard Institute of Space Science, has recently suggested that unless we attack the fundamental problem, we cannot solve the problem. In a radio interview with Australia’s ABC today, Hansen argued that the fundamental issue of carbon emissions is that fossil fuels are the cheapest energy.

“You must put a price on carbon emissions. The way to do that, and to make it acceptable to the public and actually very beneficial to the public, is to return the money that’s collected from a carbon tax, and that tax needs to be applied at the source, at the mine or the port of entry. You then distribute that money to the public, so that they will have the money to invest in more efficient vehicles, in insulating their homes, and that would encourage innovations, innovators would develop carbon free or low carbon energy sources. That’s the way that you can drive the system to slowly phase out fossil fuels, but the cap and trade doesn’t do that at all, and it’s impossible. As long as fossil fuels are the cheapest energy, you’re not going to phase them out,” Hansen concluded.

While the transfer of aid from one part of the world to another may work in some cases, it most often doesn’t work. Rather, the results of aid transfers are known to work miserably and even destructively in many cases. Aid is not a solution to the environmental crisis. The only way out is to work towards greater global socio-economic parity, something that requires the economic emancipation of the South on its own premises and not by way of Northern paternalistic policies.

The offsetting of carbon emissions suggested by people in rich countries against family planning in poor countries is offensive with racist overtones. People in one part of the world are hardly fit to make assumptions regarding the wishes and desires of those in another part, not least regarding their way of life. Moreover, it is not the duty of poor people to clean up after the rich. Twenty percent of the world’s population are using up 80% of the world’s resources and in all likelihood they are responsible for approximately 80% of carbon emissions. This will not be resolved by reducing the population that use the least energy to start with.

The first line of action for poor people should be to emancipate themselves in order to evolve their resources and potentials so that they don’t remain trapped in poverty. In addition, family planning would not be needed in a world where education is available to everybody and resources are properly utilized for consumption and not first and foremost for profit. It remains the main responsibility of all to make this fact a reality.

The entire global population has been conditioned to accept all possible excuses for maintaining the pampered privileges of those rich nations. The truth is that man-made damages to the climate and Mother Nature are chiefly due to profit-motivated policies of those same rich nations. Unless profit-orientation is replaced by a consumer-oriented perspective, capitalism’s mad race against Nature will not stop until it is already too late.