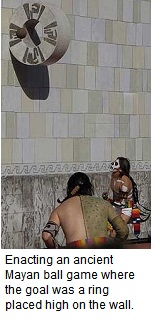 (June 2010) – It is said that even though the Mayan culture was highly developed in many respects, its inability to make proper use of the wheel brought it to a grinding halt. The picture here shows young men re-enacting an ancient Mayan ball game where the goal was a ring placed high on the wall. Why the Mayans didn’t manage to get that ring under a car on the ground will probably remain a mystery.

Capitalism seems to have got several impossible “goal rings/hoops” high up on walls, too. One such ring would be the fact that material resources are limited whereas capitalism continues to behave as if they are unlimited.

Another big and heavy ring would be the mentality that capitalism is the best system to which all other inventions throughout human history, past and future, must be subordinate. Through the lens of capitalism, economic insight, and particularly the knack of making one cent into one dollar, is the essence of what it is to be an evolved human being.

Beliefs such as the two above constitute the blind dogmas of capitalism. Exploitation in various forms and spheres — economic, social, cultural, etc. — are based on those dogmas, like any hard racial or religious dogmas. Blinded by their dogmas, “fundamentalist capitalists” can’t seem to understand that for most people, money is simply a means to an end; to living a full life, being creative, supportive, compassionate, decent, orderly, loyal, persistent, service-minded … the list goes on and on.

Human beings are all different. That is why to be human is to seek unity in diversity and not only in capitalism.

Capitalism seems unable to get their rings off the wall and under some useful car, as that would mean the end to its unlimited exploitation. Capitalism wouldn’t be capitalism any more if its basic belief-system stops at being just perpetual private ownership, unlimited accumulation of physical wealth, etc. That’s why capitalism as we know it will disappear, just like other civilizations, which could not get those rings down from their walls and under their cars, vanished.

Will we be any the poorer for it? Will the demise of capitalism as we know it add to our sufferings at all? Not if we take whatever is practical and useful in capitalism and organize it around a new central set of values and notions of what we think will serve Earth and its inhabitants better than the present values seem to do.

That’s our ring on the wall right there, basic notions and values of what comes after capitalism. Let’s place those values properly on ground!