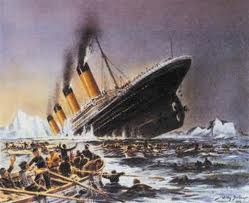 The Titanic of global capitalism has started to sink. The creaks and bangs of the gigantic ship breaking up, the shouts and howls of confused crew and desperate passengers, the incessant feed of nonsensical messages over loudspeakers, will continue to rouse general panic for some more time. In the end nothing can save the enormous structure from the very icy waters of its final demise.

A Pew poll[1] taken in April 2012 show that the economy and jobs remain the most important issues of this presidential campaign, more than four in five registered voters thought. Only one in two thought that previous hot issues such as terrorism and abortion remained most crucial.

In fact, the economic crisis in America has reached the point where voters are ready to reject capitalism itself. In December last year, registered young voters in the U.S. said they preferred socialism to capitalism for the first time ever, and were more negative to capitalism than positive: 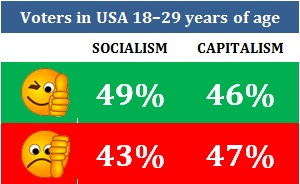 and the rats are leaving, too …

Jan. 25, 2012 (Bloomberg) – International investors say capitalism is in crisis, with almost one in three backing radical changes to the system, according to a Bloomberg survey.

As the global financial and business elite gather in Davos for their annual forum, a majority in the Bloomberg Global Poll agree that income inequality hurts the economy and that governments need to do something to address it – ideas at the heart of “Occupy” protests worldwide. Those surveyed also voice reservations about the financial industry’s role in society, with seven in 10 seeing at least some truth in the argument that banks have too much power over governments.

“Capitalism is in crisis because there is a huge and growing disparity in income/wealth distribution in Western economies, and an equally divisive generational disparity,” poll participant Michael Derks, chief strategist for FXPro Financial Services broker in London, said in an e-mail.

“It requires government intervention on an enormous scale, because an economy cannot survive if it does not invest in the younger generation,” Derks said. [2]

The present crisis in global exploitative capitalism is tremendous and in many ways unprecedented:

And the media amplifies and reinforces the crisis:

Here are some real figures:

Management responses to the present crisis are unprecedented, too. The last time the world was shattered by a gigantic economic downturn, in the 1930s, the burst of an enormous bubble of speculation took authorities by surprise. Today they are much better prepared:

This remarkable machinery will be able to somehow stall a fundamental collapse for some time. We will therefore continue to see increasingly dramatic fluctuations until the system goes down for good.

So far only Greece and Spain have seen sustained mass demonstrations in reaction to cuts in public spending, galloping unemployment, etc. Elsewhere, people still seem to think: “It isn’t really happening here, the global system has been allowed to run amok, someone fix it!”

Going down for sure

Where are the life boats then? Well, capitalism itself provides none — it never had proper plans and programs in place for economic and financial rescue. For instance, the pension funds of hundreds of millions of people are now being used for speculation on the stock exchanges. These, too, will be lost forever in that fathomless, unforgiving sea.

Capitalism is not just a few particularly bad apples. It is an all-encompassing, ever-encroaching cancer on human sense and sensibilities. In fact, capitalism was always a reckless system totally averse to taking real social responsibility in a crisis situation. Even in its death throes capitalism’s focus will remain on making profits out of the terrible chaos it has created.

It is up to ordinary people and their governments to find a new way once they are on dry land again. New laws and rules will certainly forbid liberal capitalism and favour a system better able to secure progress for all.