(PROUT Globe) – The concentration of great wealth beyond the influence of ordinary citizens is at the heart of the mounting difficulties that now make global capitalism look like the Nexus of Evil. As a first step towards establishing a real economy of real people, stock exchanges and their exploitative trading tools should be banned.

In a seminal discourse in 1984, PROUT founder P.R. Sarkar exhorted:

“Capitalists, in either their singular or collective forms, are the most pernicious economic exploiters today. All over the world they are continually exploiting local economies and draining their wealth. In nearly all cases the profits they accrue are spent outside the local area and remitted to outside stockholders and parent companies. An essential measure to control this economic exploitation is that the speculative markets in all countries of the world should be closed down immediately.”* 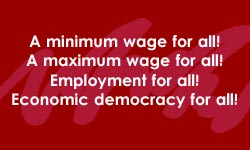 Closing down the leading institutions of an exploitative system is a first step. However, the subsequent constructive steps may seem even more important.

The world and its people need a decentralized consumption-oriented economy where profits are for developing the economy of everybody and not only of a few. It will be the job of lawmakers and the people to evolve such a humanist system.

Money needs to be kept rolling. Otherwise it loses its practical value. Right now, capitalists are holding back as they are not sure where they can get optimum returns. By their present unwillingness to invest they hurt the entire world and threaten to offset an unprecedented depression. But their greed does not allow them to act otherwise. They keep the whole world hostage to their defective mentality. Consequently, the days of capitalism as the dominating world system are numbered.

We appeal to occupants and protesters all over the world to move swiftly from being angry and upset protest movements to presenting mature sustainable and constructive alternatives for the welfare of all. In that way we may be able to present solutions that may be applicable to all, including those of a commercial and economic persuasion. The movement for economic justice is global.

5 thoughts on “Close Down All Stock Exchanges For Good”