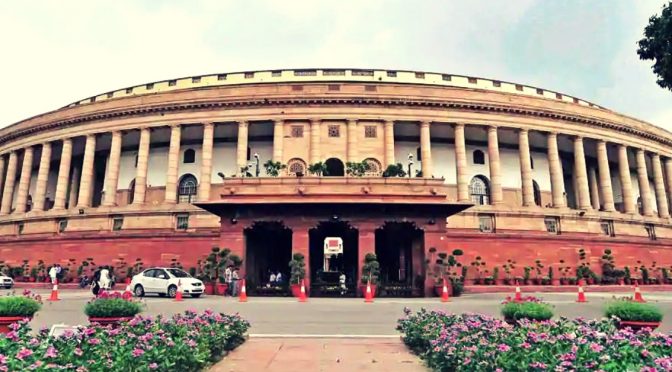 Currently, we are seeing the sordid scandal of ministers jumping in an out of parties due to suspected bribing by the corporate cash of the Centre. The main goal is to be a mantra or minister at the state level and in future at the Centre. The primary criteria for being a minister in our present era is being

Let us look at the deeper, actual meaning of the common words thrown about in our so-called democracy that is fast sliding towards an autocratic plutocracy or what Mussolini’s philosopher Giovanni Gentile called corporatism.

The word mantri is the normal term used for minister. However in Sanskrit it also means someone who has knowledge of and is established in mantras. Mantra comes from the Mananát tárayet yastu sah mantrah parikiirttitah [“That collection of sounds which, when meditated upon and chanted internally, leads to liberation”]. So someone who has practical knowledge of and is established in mantra alone is a genuine mantri. This demands rigorous morality.
To use a mantra to go within oneself in pursuit of union with the Supreme Self in the core of one’s being is called Iishvara Prańidhána. It is one of the moral principles (upayantra) of Niyama. It cannot be realised without being established in the other principles of Niyama. These are

To use a mantra to pursue union with the Supreme Self at all times in worldly life in society is called Brahmacarya or Madhuvidya. It is one of the moral principles of Yama. It cannot attain fruition unless one is a sincere practitioner of the other principles of Yama. These are

To use a social mantra to create unity in society and to inculcate the feeling that all the resources of this world (our Cosmic Inheritance) is to be shared equitably with all members of our Cosmic Family is the final form of mantra. Shrii Prabhat Ranjan Sarkar selected two universal verses out of the last hymn of the Rg Veda and sanctified them as a mantra that became the foundation for PROUT. They are:

Saḿgacchadhvaḿ saḿvadadhvaḿ saḿ vo manáḿsi jánatám;
Devábhágaḿ yathápúrve saḿjánáná upásate.
Samánii va ákútih samáná hrdayánivah;
Samánamastu vo mano yathá vah susahásati.
[Let us move together, let us radiate the same thought-wave, let us come to know our minds together,
Let us share our wealth without differentiation, like sages of the past, so that all may enjoy the universe. Let our aspirations be united, let our hearts be inseparable,
Let our minds be as one mind, so that we live in harmony and become one with the Supreme.]

The word Pradhána means the foremost, pre-eminent, supreme, superior, most excellent and distinguished. In our present political culture then the Pradhána Mantri is one who excels or is the foremost in the nefarious activities of mantris described above. Shrii Prabhat Ranjan Sarkar has described such leaders saying,

Take for example, a communal riot where a little innocent boy is killed, and when the person who encourages the riot becomes the people’s leader. Where the intellectual standard of the people is low, people commit blunders – prompted by such leaders they become beasts. Those backward countries which have less socio-politico-economic consciousness in the people tend to have more immorality. In such countries the leaders misguide the people in order to collect votes. I call such leaders “political satans” or “political pigs” Such pigs become leaders only when the intellectual standard of the common people is low. In a country with shortages of physical and intellectual pabula, people ultimately become beasts and commit sins and crimes. To murder a person during a riot is both a crime and a sin. In political clashes innocent people are killed. This is also a crime as well as a sin. So, to summarize, when physical and intellectual pabula are lacking, [then] people become beasts and commit sins and crimes. (Three Causes of Sin)

Now let us briefly see who is a genuine Pradhána Mantri. The one who excels the most or who is foremost in wisdom and realization of mantras is the Pradhána Mantri. This means one who is superior in the sustained practice of the mantra of Iishvara Prańidhána. This means they also have the capacity to inspire the collective mind of society to take to this spiritual path. It also means one who is capable to inculcating Shaoca, Santośa, Tapah and Svádhyáya in the collective mind as well.

Similarly the Pradhána Mantri is one who excels in the practice of the mantra of Brahmacarya such that the people around him and who listen to him to gain glimpses of his/her state of experiencing Consciousness in everything via the Guru Mantra.

Finally the Pradhána Mantri is one who can establish noble social mantras like Saḿgacchadhvaḿ in the individual and collective lives of the society.

The Rájyapála or Governor is the one tasked with preserving the rule of Dharma or righteousness as enshrined in a genuine Constitution created by the people based on economic and cultural democracy. The word literally means one who protects (pála) the rule (Rájya).

However, whose rule is such a leader supposed to protect? Now, in current times, it means one is to protect the power stranglehold of the party that appointed one as Governor (often as a reward for unethical past services as a judge, or other official) or to keep the Centre party in power at the state level by hook or crook. Where the actions of a Governor are guided by such illicit motivations, we can call such a person an Adharma Rájyapála. Even where the Governor is governed by intricate legality rather than the righteous principles of natural justice this is the nurturing of the rule of Adharma.

Who then is a Dharma Rájyapála? To understand this we need to have a clear idea of what is Dharma. Dharma is not a collection of religious traditions, customs, sentiments and rituals – this is dharmamata (mere petty opiniated views about Dharma). Dharma is the universal urge in human beings for justice, equality and divinity. Dharma is often described as something purely spiritual. Let us understand how animal instincts evolve into the principles of Dharma and the related cardinal values of society. For example physical hunger and need for physical expansion (land-grabbing) is transformed into psycho-spiritual expansion. Secondly, the urge to unite with a mate is transformed into the yearning for Cosmic Union. Thirdly fear causes one to serve others for the selfish reason that if a partnership is developed then survival in a harsh world becomes more possible. This selfish service evolves into the service to the Supreme Consciousness in all beings. Finally the yearning to lose oneself in endless sleep is transformed into the desire to lost oneself in endless joy of Supreme Consciousness. Each of these principles of Dharma is associated with a corresponding cardinal value. Cardinal values are various noble qualities that emanate from the shore between the mind and the spiritual realm and inspire ideals in society.

So the person who works to inculcate these principles and cardinal values in the functioning of the state governments is the Dharma Rájyapála.

Ráśt́ra means “a particular structure, a realm, country, a people or a kingdom” and pati means “owner or Lord”. Now who can be said to own a country or the political structure? In a democracy the government is said to be the property of the common people and in a plutocracy it is the property of the rich and in an autocracy it is the property of a powerful elite or dictator. While there can be some argument as to whether India is a democracy or plutocracy, one thing is clear, the lord of the country cannot be said to be the President.

Currently in India, the President is a ceremonial puppet appointed by the ruling party to serve their interests in a few crucial decisions regarding the functioning of political parties in Parliament. No President thus far has been a master or lord of the political structure let alone the people of the country. Truly the President today should be called the Ráśt́radási or the servant of those who control the political structure – corporate paid politicians.

As per PROUT according to the principle of Cosmic Inheritance, the entire wonderful treasures and entities of this universe are the property of their Beloved Progenitor or Creator. Living beings have the right to use this property in a way that benefits the entire family but they are not the Lord of these resources. Human beings may create various structures, nations and groups of people. They may think that they are the Lord of these structures, groups or countries but in reality they are just the caretaker of the actual owner. When the caretaker forgets this crucial fact and becomes a tyrant or exploiter then he become an infidel, kaffir or mleecha.

So who is a genuine Ráśt́rapati? It is someone who acts as the representative of the Cosmic Creator who is the innermost Self within all beings. He uses and amends the prevailing political structure at a particular time and place to serve this Cosmic Family (Ánanda Parivára). Hence the welfare of every single human being, plant, animal, river, mountain, etc must be nurtured and protected. Hence if the President allows the rule of a particular race, caste, religion or economic class over the others, or if the President allows the nation or people to exploit or invade other nations, then he is betraying the people of the country, betraying humanity and betraying his own innate divinity. He is then a Ráśt́radrohi (traitor).
Now every structure in the material world blossoms, decays and dies. As per PROUT, old structures become prisons for the ever-expanding minds of humanity and hence need to be destroyed so that new structures can be created. This can happen by evolution or revolution. Thus, it is the prime duty of the Ráśt́rapati to evolve and revolutionize the political structure and the Constitution so as to maximally serve the people.

The social ideals described above do not become a reality by dreaming or by force via the government. These ideals become a reality due to an internal revolution by Tantra sadhana and then using the Shakti and love gained by this to overcome the social vices and unite the divided humanity. This is the actual revolution that this country and humanity is waiting for.

Other material on India, Leadership, Political: