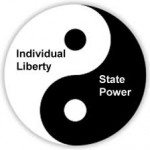 Ac. Krtashivananda Avt.
There is a general concept that ’to coerce a person is to deprive that person of his/her freedom’. But the question remains, ‘freedom from what?’. The liberal view is that one should be free to express one’s desires. But this is not so simple as it appears.

In so-called democratic countries, political freedom means voting rights, freedom of expression, freedom of association, and freedom to accumulate property without restriction. It is now clear that this concept of freedom leads to socio-economic inequality, and it has been a controversial question since the 18th century. The Marxist concept of social law is already well known.

Unlimited in the physico-psychic sphere is illogical. In this case the liberty of one person interferes with the liberty of others. One’s individual freedom to accumulate may interfere with the freedom of the many to survive. That is why many philosophers have argued that since human purposes and activities are not all in harmony, and because the put higher value on other goals, such as justice, happiness, culture, security and varying degrees of equality, they were prepared to curtail liberty.

These thinkers believed that law must limit freedom of action. Otherwise, it would be impossible to have any kind of association. Well-defined social codes of discipline, which restrict individual freedom of the collective interest, are essential for building a strong society.

At the same time there must be scope for individual freedom. Liberals like Locke and Mill in England, and Tocqueville in France assumed that there ought to exist a minimum area of personal freedom, which on no account should be violated. Total interference by State authorities in personal freedom, which prevails in totalitarian countries, is grossly defective and undesirable.

A line must be drawn between the areas of personal freedom and public authority. It is not a simple issue and many arguments have been made about this topic over the last three centuries. There is a well known proverb, however, that states, “Freedom for the pike is death for the minnows.” The liberty of some must depend on the restraint of others. A deeper insight is needed to solve this controversy.

It is a mockery to offer political rights to people who are half-naked, illiterate, underfed and diseased. They need food, shelter, medicine and education before they can understand the use of their freedom. A 19th century Russian radical writer declared that there are situations in which boos are superior to the works of Shakespeare. Individual freedom is not always everybody’s prime need. Does it trouble the conscience of Western liberals, that the minority, who possess liberty, have gained it by exploiting, or at least by averting their gaze from the vast majority, who cannot even satisfy their primary needs?

Without justice the concept of liberal morality is a useless slogan. The Russian critic Belinsky declared that, “If my brothers and sisters are to remain in poverty, squalor and chains, then I do not want liberty for myself. I reject it with both hands and infinitely prefer to share their fate. It is the freedom that I am giving up for the sake of justice or equality or the love of my fellow humans. If the liberty for myself or my class or nation depends on the misery of millions of other human beings, then the system that promotes it, is unjust and immoral.

In this context, it is well known to students of history that high-sounding slogans of liberty have echoed over the nations of Europe for the last three centuries while Afro-Asian people suffered ruthless oppression at the hands of the same nations.

Another prevalent concept of personal freedom is that the individual wants to be his/her own master. Bhikhu Parekh writes: “For a liberal, the individual is a ‘master’ or ‘mistress’ of him- or herself, owning his/her body and having proprietary rights over its constituents. As such, individuals do what they like, and the products of their labor are theirs to enjoy as they please. Individuals relate to their thoughts, feelings, opinions, rights and so on in similar proprietary terms and define liberty, equality, justice and obligations accordingly.

Hence, liberals assert: ‘I wish my life and decisions to depend on myself, and not on external forces of whatever kind.’ But this is another piece of ignorance about liberty, often to the detriment of the collective self-interest. Is a human being not a slave to his/her nature and to his/her unbridled passions and weaknesses? The metaphor of self-mastery must be understood clearly. Those who have acquired self-awareness have realized that the self is real, ideal and autonomous at its highest state of consciousness. Otherwise, irrational impulses, the uncontrolled desires of one’s lower nature, the pursuit of immediate pleasures, and the empirical or heterogeneous ‘self’ – swept by every gust of desire of passion – will dominate the individual.

There have been enough instances in history where self-motivation (not the higher self) or group or personal weaknesses were motivators for new philosophies. For instance, divorce law and the system of multiple marriages in Islamic society are detrimental to the interest of women; the priestly clan imposed this exploitative system. The ideologies of freedom of accumulation and free market economy have led to capitalist exploitation. The concept of dictatorship of the proletariat led to the massacre of millions of intellectuals, students and peasants in Russia and China. Scriptures granting authority to Brahmins sealed the fate of the so-called lower castes and women in India for thousands of years.

Freedom of expression sounds nice to the ear. But is it not a fact that in all parts of the world, pseudo-culture, religious dogma and socio-economic dogmas are influencing people’s minds? The mass media and cultural and educational institutions are controlled by the ruling class, which has a strong influence on social psychology. In these circumstances, where is the freedom of thought? And, without freedom of thought, how can there be freedom of expression?

Sarkar establishes: “It is with the assembly of many individuals that a society comes into being. In such a society, although every individual wishes to move as per one’s own reactive momenta (psychological characteristics, or samskara in Sanskrit), one cannot do so hundred percent. Individualism is possible in the subtle and causal sphere, but not in the sphere of this crude world.”

So in collective life there has to be some restriction in one’s individual expression. It should not be allowed to affect collective interests. But expressions in the private sphere – for example, the habits of smoking and drinking, or undesirable sexual indulgence – even if they are undesirable, cannot be restricted by enacting laws. A change in social psychology is essential.

Individual liberty must be allowed as long as it does not:

Taken from Prout, Neo-socialism of the 21st Century