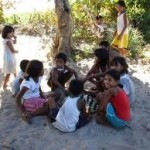 Ac. Krtashivananda Avt.
Sarkar has described the inner spirit of society as to move together. Society originated as a family in the early phase, and was strengthened subsequently under the guidance of group mothers and group fathers. With growing social complexity, group leaders emerged as monarchs. The emergence of classical religion made the social structure stronger under the dominance of the priestly class. The concept of the State is a later development. In modern times, society has merged into the State and has been converted into the nation State. Society itself has lost its identity and importance, and social laws, norms and values possess little meaning.

All social structures have been politicized both in democratic and totalitarian countries. Nevertheless, realistic relations between society and State could be formulated to create a congenial atmosphere for security and freedom. Sarkar’s main aim was to revitalize society, and through his writings and action he clearly stated that he wanted to establish a ‘moral society’, which he termed sadvipra samaj. He was not so concerned with the political structure because he concluded that it will continue to evolve and change its character in different phases of history. On the other hand, he felt that in the absence of a strong social structure, neither moral standards nor strong social relations could be realized or maintained. Simultaneously he imagined that a strong social structure would balance the power of the political structure. Human society he considered one and indivisible; hence, he emphasized the formation of a social structure from the global to the village level. When he laid the foundation of his own organization, he set up a structure that consists of 35 branches with each being extended to the village level. This means that each village should have at least 35 persons to take decisions on multifarious activities without being dependent on the dictates of the political structure. Considering the above, the relation between society and State can be defined as follows:

Simultaneously it is necessary to define the relation between the two structures in the clearest language in terms of set goals and coordination between the two. Ultimately, however, the success of social institutions depends on the evolution of a proper social culture based on the values of spiritual humanism. The materialistic orientation of life and the marketing character of modern industrial religion has created extreme forms of alienation, isolation and identity crisis in the affluent Western world. Third World countries, besides suffering economic crisis, carry the psychological burdens of passive psychology, inferiority complex, religious dogma and other group sentiments. These narrow and stagnant ideas damage social integration. The creation of social institutions on the world level with organs on the lower levels can eliminate threats from political and economic oligarchies and religious fanatics. Members of the social institutions should be established in the spirit of universalism. Sarkar explained that to be established in cardinal moral principles is essential for the qualitative transformation of the personality. He frequently used the term sadvipra in this regard. This is the only way to create social unity. Value-oriented intellectuals and spiritually free persons, who have moral integrity and are not motivated by self-interest, are the best persons to organize themselves to form the social structure. Copyright The author 2011