PROUT’s solution to wealth concentration
Prognosis for 2030: The richest 1% will control two-thirds of world’s wealth. –  UK House of Commons library figures
The concentration of wealth year on year:
2023: Richest 1% bag nearly twice as much wealth as the rest of the world put together over the past two years. – Oxfam
2022: The world’s richest 10% take home more than half of global income, while the poorest half only earns 8%. Over the past two decades, the income gap between the top 10% and bottom 50% has nearly doubled. – The 2022 Word Inequality Report
2021  The combined wealth of the world’s 10 richest men rose by $540bn during the pandemic. This amount would be enough to prevent the world from falling into poverty because of the virus, and pay for vaccines for all. – Oxfam
2019  The world’s 26 richest people own the same wealth as the poorest half of humanity. – Oxfam
2018  The super-rich accumulated 82% of the wealth created the year before – the poorest half of world got nothing. – Oxfam
2017  World’s 8 richest men are as wealthy as half the world’s population. – Oxfam
2016  World’s richest 62 people as wealthy as half of the world population. – Oxfam
2015  1% of the world’s population will own more wealth than the other 99% by next year. – Oxfam
Russia 20+ years after the collapse of Communism:
– 1% of the Russian population controlled 71% of all wealth
– 110 persons controlled 35% of all wealth
– More than 9 out of 10 Russians owned less than the equivalent of $10.000 – Credit Suisse 2013

Dignified socio-economies both closed and open, Prout’s synthesis of protectionism, free trade, and the beginnings of integrated world society.

Buy locally produced goods and get more for your money; the hidden costs of importing every-day items.

Amra Bengali protesting against plans for a separate Gorkhaland in Bengal, at Shyam Bazar, Kolkata (click for more images)

Asst. Dist. Magistrate Sher Singh has offered that PROUT was the reason for the cruel attack and murder of the 16 Ananda Marga monks and one nun in broad daylight in Kolkata in 1982. The Ananda Marga organisation supports PROUT throughout India and the world. The atrocities were witnessed by thousands of people but no arrest has been made till date. Click to read the report 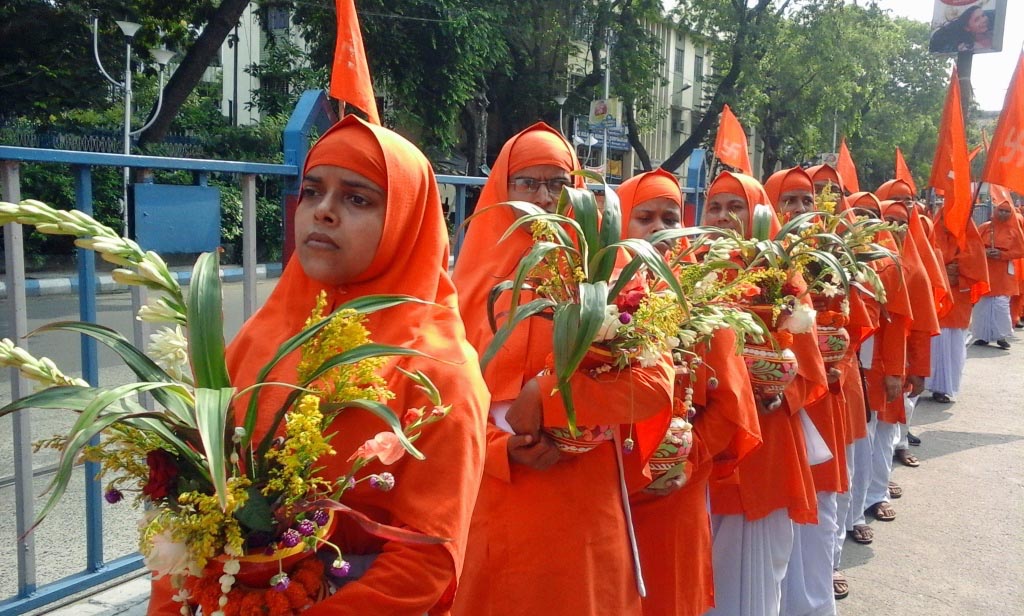 Ananda Marga wholetimer volunteers walk on the streets of Kolkata with urn pots in their arms on annual memorial day of the Bijon Setu massacre, April 30 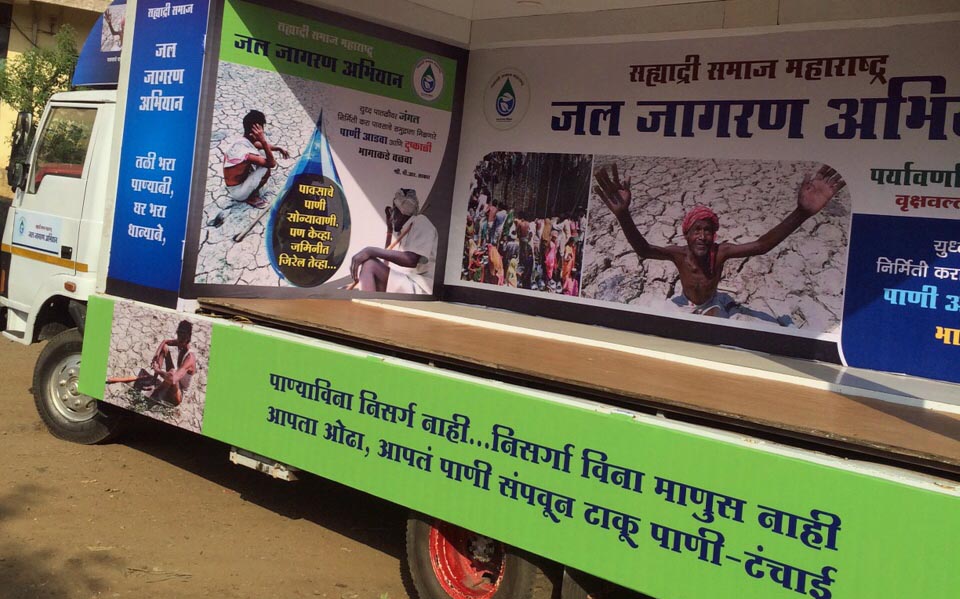 A thought exhibition van, propagating water conservation and Prout, travels from Pune, Maharashtra through the Sahayadri and Marathwada regions ahead of the rainy season in India. Wells are drying up and underwater tables falling so fast in the Middle East and parts of India, China and the US that food supplies are seriously threatened, a world leading resource analyst has warned. The propounder of Prout, Shrii Prabhat Rainjan Sarkar, offered a visionary analysis and practical solutions for the global water crisis. Sarkar’s ingenious methods of utilizing water are applied by Proutists and others around the world.

Today’s banking is dominated by all-devouring colossuses that crave to be fed by public money, whenever their speculation fails spectacularly, to continue their existence as masters of global trade. In contrast, PROUT’s decentralized banking system presents a rational approach to supplying money when and where it is required for human welfare. Click to read…

Further escalation of the crisis of capitalism will cause unemployment figures to rise sharply throughout the world. Around the world youth unemployment is particularly high. By virtue of its decentralized, balanced economy and emphasis on the cooperative sector, PROUT guarantees 100% employment and increasing purchasing capacity for all.

The 5 Fundamental Principles of Prout 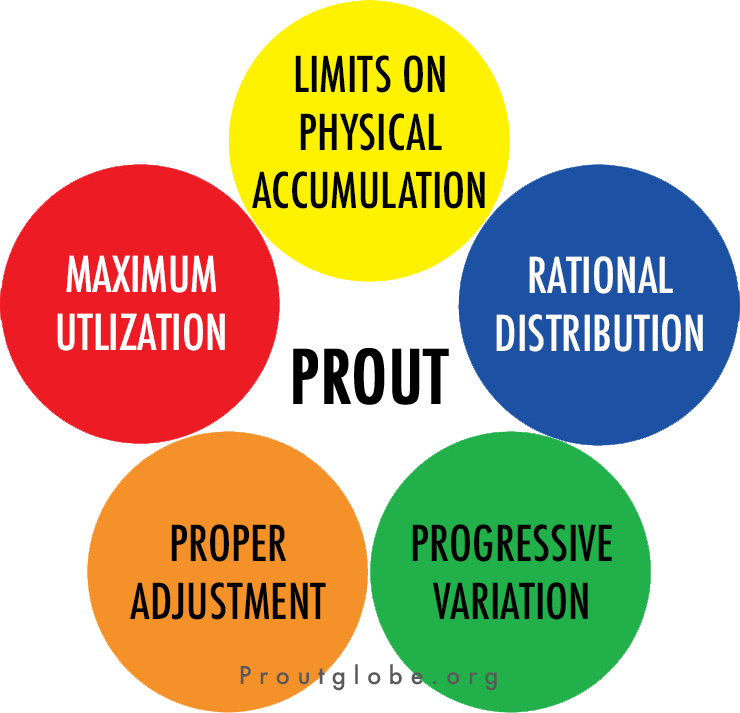 New to Prout terminology? Click for a rudimental dictionary

1. No individual should be allowed to accumulate any physical wealth without the clear permission or approval of the collective body.
Physical resources including money and wealth are limited. Therefore their use must be optimised and not centralised in a few hands.

3. There should be maximum utilization of physical, metaphysical and spiritual potentialities of unit and collective bodies of human society.
The good of the individual lies in the collective, and vice versa. While providing for the physical comforts of the individual and society, individual spirituality and morality must be increased proportionally so that the absence of it may not break society's backbone.

4. There should be proper adjustment amongst these physical, metaphysical, mundane, supramundane and spiritual utilizations.
Current strengths and talent should be properly utilised while focusing on the continued realisation of still higher and more sublime potentialities of all.

The Proutist system is based on what we call economic democracy. In economic democracy the majority of shares in very large companies like IBM, Toyota, Mercedes Benz and so would be held by the employees themselves. They own at least 51% of the shares and when that happens then this majority will elect a board of directors and the board of directors will appoint a CEO. In such a system, whenever productivity rises, wages will automatically go up in proportion to productivity because if the CEO does not give them higher pay he will be thrown out. So what we need is an economic system in which wages go up in proportion to productivity. This system is not only fair but it is also a stable system. It would not allow any depression or any kind of recession in the economy and we will not need any government help ever to fight recessions. Whenever wages rises, productivity demand increases supply. There are never any layoffs.

Study Prout with friends or by yourself

The Sarkar Game is an action learning process that introduces participants to the Social Cycle and its holistic perspective of social change. This group game was created in 2004 by Peter Hayward and Joseph Voros of the Strategic Foresight Institute at Swinburne University of Technology in Australia. Their colleague, Sohail Inayatullah, has successfully used this technique in hundreds of workshops with professionals. Have a look and see if you and your friends can use it!