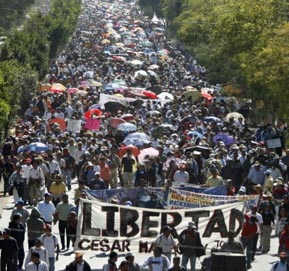 All popular movements are rooted in a sentiment, because an emotional appeal is always stronger than logic. Negative sentiments, such as those directed against another race, nation or class, divide humanity and eventually cause great suffering. Instead, leaders should arouse positive sentiments based on the cultural legacy of the people. The spirit of the people can be rallied against exploitation, against immorality, and in support of their traditional cultural identity. This is the way to generate a positive revolution. Though regional in approach, these strong, positive sentiments can unite society and elevate humanity.

“The forces opposed to revolution possess immense military power. In spite of this, the revolutionaries will achieve victory… because moral and spiritual power is infinitely stronger than physical force.”

Proutists should start and cooperate with other movements against specific issues of exploitation. By organizing a demonstration, march or protest rally, the public can be mobilized. João Pedro Stedile, a dynamic leader of Brazil’s Landless People’s Movement (MST), says, “Popular rallies are part of the life of the people… The spirit of marches has been present in the entire history of humanity.” The effort to create a popular samaja regional mass movement is based on all of these factors.

Good, brief slogans, about 5-12 words each, inspire people and awaken their curiosity about Prout–see Appendix E. A banner three or four meters long of cloth or canvas can be stretched in front of your group. Additional people can hold a high stick with two signs back-to-back with different slogans, so by turning the stick, people in every direction can see your messages. The more signs, the better. Every banner and sign should say in small letters at the bottom, “The Progressive Utilization Theory (Prout)” with the web page, so that those who are nearby can read it.

Invite those who will march to come for a sign-making party. Give them the list of slogans, and invite them to choose the ones they like best or make up their own. Some slogans translate well into other languages. If the signs are large and well made, they will get media coverage and will be seen and read by both the protesters and the public. The same banners and signs can be saved and used again in other demonstrations and rallies in the future.

Whereas the signs and banners of other groups protest against what is wrong (such as war, exploitation and corruption), Prout’s messages are mostly positive and inspiring, offering hope to the people.

How can a evolutionary movement hope to succeed against seemingly impossible odds? The powers that be hold tremendous financial and military power. During the dictatorship of President Ferdinand Marcos in the Philippines, people said that he had “the three G’s: all the guns, all the gold and all the goons (criminal assassins).” Yet in 1986 the people took to the streets and united against him, and the tactic they called “people power” had to be added to political science textbooks as a successful strategy for social change. Popular citizens’ movements have also toppled dictators in Haiti (Duvalier, 1988), all the Communist countries of Eastern Europe, Thailand (Suchinda, 1992), Indonesia (Suharto, 1998), Yugoslavia (Milošević, 2000), the Philippines again (Estrada, 2001), Georgia (Shevardnadze, 2003), Bolivia (Sánchez de Lozada, 2003), Ukraine (Yanukovych, 2004-5), Kyrgyzstan (Akayev, 2005), Tunisia (Ben Ali, 2010), Egypt (Mubarak, 2011) and Yemen (Saleh, 2012).

P. R. Sarkar explained this type of strength when he wrote: “The forces opposed to revolution possess immense military power. In spite of this, the revolutionaries will achieve victory… because moral and spiritual power is infinitely stronger than physical force.”*

Other material on Movements, Samaj: