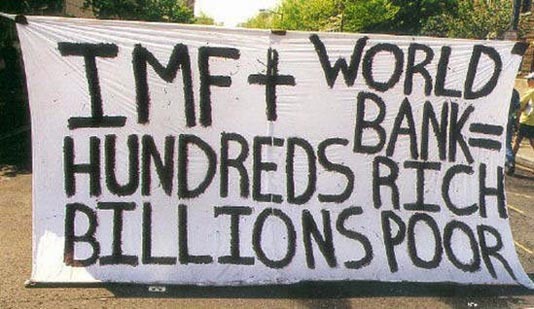 During economic recessions the United States reduces it interest rate. At the moment it stands at near zero in order to spur growth and reduce unemployment.

On the other hand, having to swallow the bitter pills of IMF, aid recipients are required to increase their interest rates by double digits, which leads to an increase in their unemployment rates and depresses their economies further.

During the 1997 East Asian economic crisis, a popular phrase was used to characterize the IMF and its policies: For the average person the actual meaning of IMF was “I’M Finished.” After watching IMF at work during the crisis, Joseph E. Stiglitz, the 2001 winner of the Nobel Prize in economics, wrote in April 2000:

I was chief economist at the World Bank from 1996 until last November, during the gravest global economic crisis in a half-century. I saw how the IMF, in tandem with the US Treasury Department, responded. And I was appalled.[i]

The IMF may not have become the bill collector of the G-7, but it clearly worked hard (though not always successfully) to make sure that the G-7 lenders got repaid.[ii]

It was after watching the IMF at work during this crisis that Joseph E. Stiglitz, the 2001 winner of the Nobel Prize in economics and chief economist at the World Bank from 1996 to 1999, expressed how appalled he was by the way the IMF and the US Treasury Department had responded (as quoted in the introduction of this book).

“The IMF may not have become the bill collector of the G-7, but it clearly worked hard (though not always successfully) to make sure that the G-7 lenders got repaid,” Stiglitz wrote.[i] It was perhaps he who described the crisis best:

The IMF first told countries in Asia to open up their markets to hot short-term capital [It is worth noting that European countries avoided full convertibility until the 1970s.]. The countries did it and money flooded in, but just as suddenly flowed out. The IMF then said interest rates should be raised and there should be a fiscal contraction, and a deep recession was induced.

As asset prices plummeted, the IMF urged affected countries to sell their assets even at bargain basement prices. It said the companies needed solid foreign management (conveniently ignoring that these companies had a most enviable record of growth over the preceding decades, hard to reconcile with bad management), and that this would happen only if the companies were sold to foreigners—not just managed by them.

The sales were handled by the same foreign financial institutions that had pulled out their capital, precipitating the crisis. These banks then got large commissions from their work selling the troubled companies or splitting them up, just as they had got large commissions when they had originally guided the money into the countries in the first place.

As the events unfolded, cynicism grew even greater: some of these American and other financial companies didn’t do much restructuring; they just held the assets until the economy recovered, making profits from buying at fire sale prices and selling at more normal prices.[ii]

In his book Globalization and Its Discontents, Stiglitz, who was also a member of the Council of Economic Advisers under President Clinton, described meetings where President Clinton was frustrated because an increase of one-quarter to one-half percentage point in the interest rate by Federal Reserve Bank Chairman Alan Greenspan might destroy “his” nascent economic recovery.[iii]

A comparison here with the actions of the IMF during the East Asian debacle is instructive: There, the IMF forced interest rates to raise by 25 percentage points—fifty times the interest rate Clinton complained about—for economies going into recession. The IMF argument for this enormous increase was that higher rates would make a country more attractive for investors.

In reality, it made the situation even worse. Generally, a crisis starts due to Western creditors’ refusal to roll over short-term loans out of concern about firms’ potential inability to repay their loans on account of high indebtedness. A large increase in interest rates, however, makes matters worse for these firms.

Excerpted from Casino Capitalism: The Collapse of the US Economy and the Transition to Secular Democracy in the Middle East
Dr. Susmit Kumar, 2012.
Buy it and other books by the author here