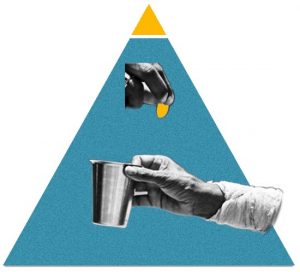 The global trend of wealth concentration does not bode well for global capitalism. A main precursor of its armageddon is that the money accumulated by capitalists stops circulating and remains inert or unutilized. The huge hoarders think that if “their” money are allowed to roll freely then their profits will decrease, even though it will bring relief to the common masses. Capitalism is caught in its own sorry trap much in the same way as the proverbial monkey’s fist by the food trap. The tragedy is the colossal suffering taking place in so many ways in today’s world.

In India, 57 billionaires have the same amount of wealth as the bottom 70%. The top 1 per cent of the Indian population owns 58.4 per cent of India’s total wealth, according to an Oxfam report.

In the USA, the five largest financial firms — JPMorgan Chase, Citigroup, Bank of America, Goldman Sachs and Morgan Stanley — control about 70 percent of all commercial bank deposits and hold on their combined balance sheets over $10 trillion in assets, roughly equal to two-thirds of the American economy. More than 90 percent of their assets is backed by debt, with very little equity capital
(source: Robert Lenzner).