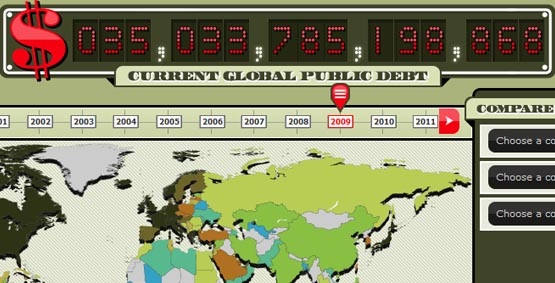 Across the rich world, governments are borrowing vast amounts as the recession reduces tax revenue and spending mounts on bailouts, unemployment benefits and stimulus plans.

While governments advisers have propagated that the worst global economic storm since the 1930s are clearing, another cloud is looming on the financial horizon: massive public debt. Proutist economist Ravi Batra has defined debt-unravelling as "the biggest pain in the world".

The Economist has devised an online guide that keeps a running total of the current global public debt – updating every few seconds – and provides projections of how it will grow. There is also an interactive map that allows users see which countries The Economist finds are particularly laden with debt – America, the UK, most of continental Europe – and which are less dependent on borrowing to balance the books – India, China, much of Africa.

The magazine admits that its clock is "not perfectly accurate", but is meant to provide a graphic perspective on an important economic issue. The clock is modelled on the National Debt Clock in New York, that had to be fitted with an extra digit in 2010 to cope with America's growing national debt.