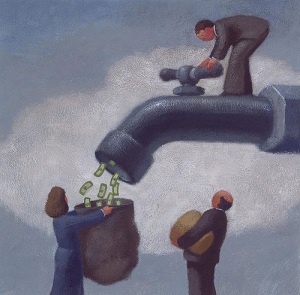 Dr. Susmit Kumar
More than eight millions are unemployed in the U.S. today, with little relief in sight. On the other hand, the people on Wall Street are again making hundreds of millions of dollars as if nothing has happened. If you follow the money trail, you will find that most of this money is coming out of the pocket of common people. When you squeeze the juice out of a fruit, then what remains in the fruit? That’s what the hedge funds/Wall Street have done with the US and the global economy.

Under the pressure of Wall Street pundits, every CEO has to show profits each quarter otherwise he will lose the post. First this led to the consolidation of firms, i.e. mergers; then lean and thin firms (i.e. lay-offs inside the firms) and finally shifting of job overseas. In a few firms top officials took extreme measure of cooking of books and many of them are in prison now. In the end, it is the common people who are bearing the brunt of the curse of Wall Street phenomena. I have written some examples in some of my articles:

Only when the internal documents (emails, phone records, etc.) of firms are subpoenaed or come out in public, then we come to know how they are making money at the expense of common people. Just recently the internal document of Goldman Sachs showed that they were selling shaky sub-prime derivatives to their clients – and at the same time they were betting against them!

During late 1990s and until its bankruptcy, Enron was named by Fortune magazine as “America's Most Innovative Company” for six consecutive years. But after the subpoena of its phone records, it was found that Enron milked several billion dollars by creating the 2000-01 artificial California energy crisis while its analysts were laughing at the plight of people in California who were facing the worst black-outs in several decades.

With the advent of internet technology and subsequent integration of national and global economies in the last couple of decades, brilliant brains have devised algorithms, which resemble casino games, to generate money for millionaires and billionaires. Using these algorithms, hedge funds and investment banks create trillions of dollars of investments on paper for extra-ordinary returns but in the time of losses it is the taxpayers who lose trillions of dollars.

Wall Street and other financial institutions have become the modern-day Las Vegas and Atlantic City, i.e. casinos where only ultra-wealthy and people working there can win. In traditional casinos, in Atlantic City and Las Vegas, most of the games are biased in favor of the owners, and amateur players rarely end up winning. Similarly at Wall Street and other financial institutions, top executives and hedge funds earn multi-million dollars whereas for most of time common people think that they are winning, but suddenly due to a financial setback they realize that everything is gone. As majority of firms have opted out of pension plan and working people are dependent on their 401(k)s for their retirements which are heavily invested in stocks, this gives a very bleak scenario for the future of U.S retirees.