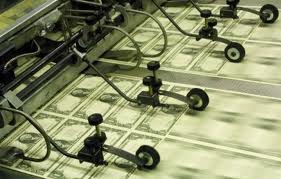 The quantitative easing (QE) programs, where governments supply fresh money to banks for lending, are not delivering the goods. At least not to the officially intended receivers.

Instead of supplying financial vitality to consumers, most of the freshly issued money seems to be gobbled up by banks, leaving ordinary people as they were, at the bottom of the welfare pyramid.

Credit to households and business has been flat for months and is now shrinking, The Telegraph (UK) reports. Further widespread use of the QE tool will probably only increase the risk of world wide stagflation, many economists opine. (See also: Await the Triple Dip Recession, even the Quadruple.)

According to PROUT, QE is a counterproductive measure. It does nothing to improve the consumer economy. To the contrary, the program is based on putting people into further debt. And, since the commercial banks to a great extent retain the mountains of money, supplied to them by the central banks, as security, for servicing their own debts, and for paying out bonuses to their employees, rather than actually lending to “risky” consumers, in practice tax payers bear the brunt so that banks may sail through hard times in style.

The authorities should therefore change their policies and start to develop a rational financial sector where lending institutions are part parcel of the local economic area. Banks should serve people’s productive enterprises. They should first and foremost aim to establish and keep developing the purchasing capacity of local people, and not suck people for profits.

The banking system needs to be redirected from being self-centered to being omni-oriented. Financial institutions are to serve the grass-roots first. Under no circumstances should they be allowed to profit from activities outside of their area.

PROUT advocates a comprehensive system of socio-economic decentralization, local economic control, supported by a number of fiscal and monetary policies to counter the ill-effects of capitalist centralization and pave the way for a righteous society. The time for the implementation of this thoughtful system is fast approaching. (Suggested reading: Trade and Commerce.)