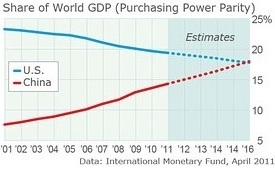 Dr. Susmit Kumar
During the two World Wars, and especially after WW2, the US gross domestic product was more than half of the world's total gross product. The erstwhile European superpowers were at their lowest point, their industrial basis annihilated by axis and allied bombing.

So-called US capitalism thrived for the next 30-35 years. Then US started printing dollars to fund its twin deficits — budget and trade. Japan was the first country to fund US deficits in a big way, then China followed suit.

Even if US now would stop importing from China, large domestic enterprises like Walmart and Home Depot would buy from other countries as otherwise their profits would plummet if they went for domestic supplies.

Capitalism was never successful in the US. Becoming rich by funding European wars and then start printing huge volumes of your own currency to fund your luxuries, is not a mark of successful capitalism.

Suppose Germany would have developed long-range bombers during (or before) WW II and destroyed the US manufacturing base, then some country or the other, which would have supplied the US, UK and other European nations in order for them to fight the war and to eventually win it, would have taken the US position (after WW2). That is, they would have emerged as the economic superpower.

A decade ago the US economy tripled China's. Today the US credit card has maxed out.

Capitalism is Already Dead in US
U.S. is as Corrupt as a Third World Country

Dr. Susmit Kumar is the author of The Modernization of Islam and the Creation of a Multipolar World Order