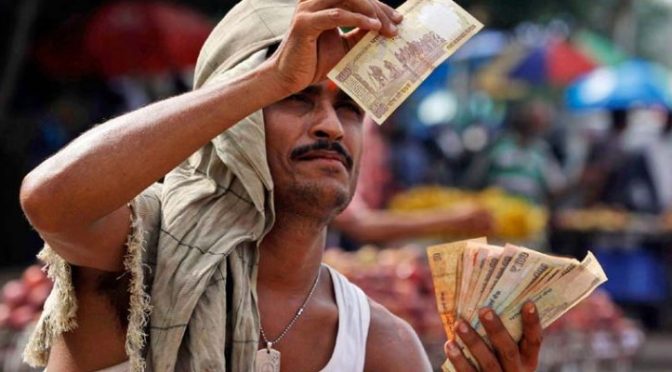 Please click here for its Part I: Is “Make In India” Theme Helping Indian Economy? – Part I

As shown in Charts 1 to 9 below, India’s foreign trade is following in the footsteps of that of the US, a bankrupt country surviving on printing its currency which happens to be the global currency. As explained in Part I of this article series, before even thinking to become a super-power, a country needs to generate a trade surplus, which the US did for more than 30-35 years after World War II, China since early 2000s (Chart 6, 7 and 8), and both Japan (Chart 4) and Germany (Chart 5) in recent decades. The last two countries are economic super-powers but are too small to be military super-powers.

As explained in my article The US Dollar – A Ponzi Scheme, during World War II, US enticed all other countries by claiming that it would keep its dollar pegged to gold at the rate of $35 for one ounce of gold. (Please read my article “Chinese yuan replacing US dollar as global currency: A not so distant prospect” for how the US Dollar became the Global Currency due to the 1944 Bretton Woods Accord). The US asked other countries to use the US dollar as reserve currency and also for conducting transactions between countries. This resulted in the 1944 Bretton Woods Accord, signed by 44 countries. As per the agreement, you could have asked the US govt to give you one ounce of gold for $35. As shown in Charts 2 and 3, the US had trade surplus from the end of World War II till early 1970s, but since it has had trade deficit year after year. The reason for it is that Nixon de-linked the dollar from gold in 1971, after which the US has just continued to print dollars to fund its trade and budget deficits. This has been going on since the Reagan administration. Had the dollar not been the global currency, there would not have been “Reaganomics”, the much-revered economic theory of the Republican party. According to economist Allan H. Meltzer at Carnegie Mellon University, “We [United States] get cheap goods in exchange for pieces of paper, which we can print at a great rate.” (“U.S. Trade Deficit Hangs In a Delicate Imbalance,” Paul Blustein, Washington Post, November 19, 2015).

Unlike the 2003 Iraq War, for which the U.S. has had to bear all costs, the U.S. made money out of the first Gulf War in 1991, though its allies lost money. Out of about $61 billion cost for the 1991 war, $32 billion was paid by Kuwait, Saudi Arabia, and other Gulf States, and Germany and Japan paid $16 billion. Because of this, the U.S. balance of payments immediately after the war was positive, a very rare occurrence nowadays since it has happened only once in the last 35 years. Apart from these payments, Saudi Arabia and other Gulf countries bought more than $400 billion worth of arms and ammunition from Western countries, mainly from the U.S., over the next decade. This helped in jumpstarting the sluggish U.S. economy, which was facing recession during the last years of the Bush Sr. administration. Following that, it was the information technology revolution that stimulated the economy. The advent of information technology, including the Internet, as well as soaring stock prices and housing markets, which gave consumers extra money to spend (two-thirds of the GDP depends on consumer spending), helped the Clinton administration balance the federal budget and helped state governments increase their revenue beginning in the mid-1990s.

Although India is a member of WTO since its inception on January 1, 1995, it has trade deficit year after year. When the United Progressive Alliance (UPA), led by the Congress Party, took over the reins in 2004, progressive deterioration in trade deficit ensued till 2013. In 2008, crude oil price went up to $140 a barrel, but did not remain this high long enough to damage India’s economy. In mid-2008, we got the Great Recession in US which led to the collapse of the price of crude oil. But when it again went up during 2011-13, it damaged the Indian economy and rupee significantly. In 2013, some economists were even started writing the obituary of the Indian economy. Prime Minister Modi is fortunate that he took over the reins in 2014 when the crude oil price went down and not earlier.

At the onset of the 2008 recession, the economies of the East European countries were on the verge of collapse. In an October 2008 speech, Romanian President Traian Basescu pinned the blame on “corrupt” outsiders. He said, “There were smart guys coming to Romania, who had studied at Harvard and Oxford, and they invented how to increase the value of one’s shares without actually having money.” (Craig Whitlock, “Financial Crisis Leaves Romania Reeling,” Washington Post, November 5, 2008.) His statement describes in brief the Reaganomics, the current fundamentals of the US economics. Wall Street has created and sold the US to its Frankenstein China. Until the start of the 2008 economic downturn, Wall Street hedge funds were creating havoc in Third World countries, for instance the 1994 Mexican peso crisis and the 1997 East Asian Economic crisis. Now they are doing the same in the United States and the European Union.

During the 2008 Global Great Recession, the unemployment in Germany was in single digit only, unlike the nearly double-digit unemployment in United States and other EU countries, and the lowest any time after the unification. During the 2008 recession, the German government offered money to firms to retain workers and cut working hours instead of producing layoffs. Hence, Germany came out of recession early. Its manufacturing sector still contributes about 25 percent of its GDP as compared to only 11 percent in the case of the United States. German corporate boards have generally equal numbers of management persons and workers, and hence the future of a firm is decided by stakeholders instead of shareholders. For this very reason Germany is still the world’s second-largest exporter and has not faced the same severe crisis that countries such as the United States and other Western nations have been facing due to emergence of the global Chinese workshop.

The sudden collapse of the Soviet Union is a warning to India. Despite being a military super-power, with significant number of aircraft carriers, submarines, military aircrafts and tanks, second only to the US, the Soviet Union collapsed due to the paucity of some tens of billions of dollars. As explained in my article Communism Collapsed Due to Collapse in Oil Price in Late 1980’s and German Banks – Not Due to Reagan, the Soviet Union collapsed because it could not get external funding for modernizing its economy under Mikhail Gorbachev’s Perestroika and Glasnost policy. There was drastic reduction is price of crude oil, the main Soviet export, during late 1980s and early 1990s after the end of Iraq-Iran War (1980-88). Crude oil price dropped from an average of $78.2 a barrel in 1981 to as low as $7 a barrel one time. These two factors led to a rise in Soviet external debt. In 1985, Soviet oil earnings and net debt were $22 billion and $18 billion, respectively, whereas these numbers in 1989 were $13 billion and $44 billion, respectively. By 1991, when external debt was $57 billion, creditors, many of them major German banks, stopped making loans and instead started demanding repayments, contributing to the collapse of the Soviet economy (Jeffrey Sachs, The End Of Poverty, The Penguin Press, New York, 2005, p. 132.). Because of lack of hard currency Russia’s shelves were empty of bread. In 1984-85, the USSR imported 55.5 million tonnes of both wheat and coarse grain, a record for a single country to take in one year. Beginning with the 1972-73 crop season, the Soviet Union imported more wheat than any nation had ever done. It is an irony that today Russia is the number one exporter of wheat in the world.

Had oil prices increased, like it did during early Putin administration (2000s) or had German banks financed Gorbachev’s Perestroika and Glasnost like Japan and China financed US debts since 1980s, the USSR and communism would not have collapsed in 1991.

Unlike the Soviet Union, the US has been getting external funds from Japan during 1980s and 1990s, and thereafter from China, in form of treasury bond investment as well as foreign investments in its private sectors and other government bonds, like Fannie Mae and Freddie Mac bonds. Till last year, both Japan and China had more than $1 trillion US Treasury Bonds, each. Even countries like India and Russia had significant amount of their FOREX invested in the US financial system.

As explained in Part I, the “Make-in-India” policy of the Modi government has no significant positive bearing on the trade deficit. India should stop listening to the US educated economists and MBAs because their brains are poisoned by massive propaganda of the Reaganomics by the Republican Party in US. Reaganomics is reduction of taxes and the promotion of unrestricted free-market activity. As explained above, had the US Dollar not been the global currency, there would not have been “Reaganomics”. In order to achieve trade deficit, the Modi administration needs to come up with a way to incorporate the German and Chinese industrial policies. 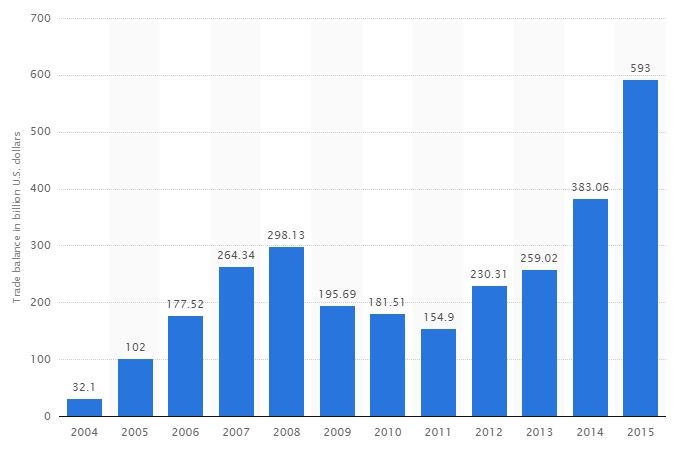