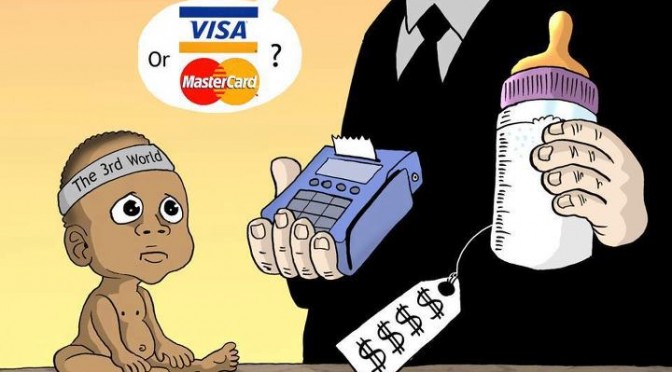 [PROUT Globe] – The term ”debt crisis” describes the situation where countries are unable to pay their foreign debt. Topically, African and Latin American countries have been compelled to spend the major part of income from their exports on paying off foreign debt, forcing them to take new loans to pay old loans. The result: the more they pay the more they owe, and the less income from exports goes towards internal development in those countries.

At present, one in four of the world’s countries are in a debt crisis or near to it. These 50 countries total 436 million people. As clear from recent developments in Europe, one country’s debt crisis affects its neighbours, other countries in the region, and directly or indirectly the rest of the world. In this way, the continents of Africa and Latin America are particularly hard hit by the debt crisis, which continues to affect the entire world as well.

Under exploitative capitalism, massive debt does not equal debt crisis. The Economist's debt clock displays a running account of accumulating national debt all over the world. It indicates that the greatest debtor nations are not those who are in or near debt crisis. Rather, most of the countries in the debt crisis zone are poor and have relatively little debt compared to rich countries.

Debt crisis is a vicious circle that needs to be stopped and set right. PROUT suggests the following remedies for ending the debt crisis:

•    A system of basic protection of local economies should consist of both prioritising local produce and prohibiting exports of local raw materials.
•    Further on, a system of cooperative free trade should be evolved to remove import- and export duties on consumable commodities, but only once basic self-sufficiency is attained – i.e. countries that are basically self-sufficient may engage in such free trading.  This means that overproduction in one place can be consumed by other countries.
•    Barter (exchange of goods) and not purchases by money transactions should be the preferred basis of trade among those basically self-sufficient countries.

As is evident from the above, PROUT is only possible in the absence of exploitative capitalism.

The Eight Principles of Economic Democracy

Dr Ravi Batra: Debt unraveling is the biggest pain in the world

Commentary: "A debt is a debt and it is a contract," Lagarde