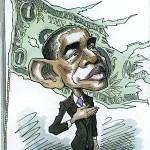 Bruce Dyer
(Sept 2003) – In the face of the underlying weakness of the American economy, there is a growing sense of inevitability that sooner or later the dollar will be forced to depreciate, an event that will have significant repercussions for the USA and the world economy.

The US dollar accounts for almost 70% of global currency reserves – the money that nations use to finance international trade and hold to protect their own currencies against financial speculators. Because it is so dominant any marked shift in its value would inevitably have major repercussions around the world.

The global demand for dollars has enabled the US to pay for considerably more than it earns from its domestic production with 1991 being the only year in the past 20 in which the US supplied more goods and services to the rest of the world than it took in. In the other 19 years, the US has run a deficit on its import-export account to the point where it has become the leading debtor nation with a mind boggling $6.3 trillion dollar deficit (60% of GDP).

Other structural imbalances in the US’s economy include the recent return to annual budget deficits in the hundreds of billions due to unaffordable 2001 tax cuts, unsustainable credit expansion, corporate accounting abuses, near zero personal savings, record personal indebtedness, and reliance on and over consumption of Middle Eastern oil.1

These together with the build-up of military spending, the Iraq war and the new Bush doctrine of pre-emptive attacks on any country deemed to threaten the US’s future national security, have led global investors and currency speculators to unload dollars and US assets which in turn, has contributed to a rapid deterioration in the US’s financial position.2

According to William Grieder, the national editor of The Rolling Stone, the US’s ambitions to run the world, are heavily mortgaged. Fifteen years ago, its net foreign indebtedness was zero. Before the US’s net balance of foreign assets turned negative in 1988, it was a creditor nation itself, investing and lending vast capital to others, always more than it borrowed. Now Greider sees the trend line as most alarming. “Like any debtor who borrows more year after year with no plausible way to reverse the trend, a nation sinking deeper into debt enters into an adverse power relationship with its creditors – greater and greater dependency.”3

The Euro meanwhile, is moving closer to being a competing world currency. It suffers from none of the major underlying crises afflicting the US economy and has appreciated by one third against the dollar since early 2002, when it traded at 84 cents. This is remarkable in view of the fact that the European Union’s economy is neither booming nor absorbing huge investment funds from around the world. Moreover when next year the European Union acquires 10 new members, its GDP will be roughly the same as that of the US, and its population 60% bigger. If adopted by all the members of the union, the Euro will begin to look like a more stable and more attractive investment than the dollar.4

Despite these developments Japan holds more than 90% of its reserves, and China the bulk of her reserves in US dollars. While agreeing with the need for the dollar to depreciate, Brendan O’Donovan chief economist with Westpac in New Zealand expects that because the US remains the powerhouse of the world economy and Asia’s main trade is with the US, the US dollar will maintain its importance as a reserve currency.

An article in the Financial Times on the 30th July 2003 by Chen Zhao notes that China and Hong Kong have been buying more US Treasury securities than any other creditor nation, with combined annual purchases of $290bn. Also bigger than with any other country, is the US’s bilateral trade deficit with China which has reached $110bn.

With their reserves accumulating rapidly, buying dollars is helping the Chinese keep their own currency steady. It has also allowed US interest rates to remain low, which in turn has encouraged American consumers to buy more Chinese goods.

While this game serves the purposes of Chinese and US policy makers alike, Zhao believes it also creates economic and financial distortions that are both self-limiting and self-defeating. With a collapse in interest rates fuelling consumer spending, it is conceivable that the US current account deficit will increase rapidly. Zhao warns that “there is no magic number the current account deficit must reach to signal an impending crisis – but there has never been a nation that has been able to increase its reliance on foreign savings without eventually hitting a brick wall”.

In response to his question “When will the game playing come to an end?” he says “When the Chinese have had enough.”5

“The US cannot live beyond its long-term means forever, nor will US assets always be so favoured by global investors” Mann wrote7 in an article ‘Is the US Current Account Deficit Sustainable?’ published by the IMF in March 2000. “When a change in investor sentiment comes, it could be dramatic. Were the dollar to be depreciated by a significant amount of say 25 percent, she believes “US consumers would shift from buying imported goods and services to buying those made domestically and US labour markets would tighten further. The combination of rising wages and a falling dollar likely would drive up prices.” Then, she believes, the Federal Reserve would try to choke the developing inflation by raising interest rates, thus disrupting financial markets around the world.

Caroline Freund of the Federal Reserve researched the same ground as Mann and also found that the US deficit was unsustainable except that she reckoned that the markets normally bring about these corrections when the deficit rises above 5% of GDP rather than 4.2%.8 With US deficit being expected to exceed 5% by the end of 2002, Mann and Freund’s work led economists employed by stockbrokers and merchant banks to alert their clients to the dollar’s potential fall.

Morgan Stanley is one of the world’s leading financial investor firms. Steven Roach, Morgan Stanley’s chief economist, warned9 several times early in 2002 of ‘a US balance of payments crisis by 2003’ and ‘America’s looming current-account adjustment’ while his colleague, Eric Chaney, talked of ‘a massive devaluation’. Their predictions will certainly help bring about10 the crisis they warn of since they will be used by Morgan Stanley’s 61,000 employees around the world to encourage clients to switch out of the dollar into sterling or the Euro. In short, the present system of world money creation is clearly unstable.

Roach again – “Can a saving-short US economy continue to finance an ever-widening expansion of its military superiority? My answer is a resounding ‘no.'” What will therefore happen? The prices of dollar-denominated assets compared to those of non-dollar-denominated assets” must fall, and fall drastically soon. Roach estimates: “a 20% drop in real exchange rates and nearly double that in nominal terms, higher real interest rates, reduced growth in domestic demand, and faster growth overseas.”11

Opposition to US policies growing

On 15 February 2003 in an unprecedented display of solidarity more than 10 million people in 600 places around the world delivered a clear NO! to the impending attack on Iraq by the US and UK. Writing in the UK’s Guardian, George Monbiot has called for those opposing the US to switch to Euro as a means of curbing American power.12

A report completed in late July by the New York consulting firm RoperASW, has shown that the value of America’s favourite brands has slipped. Based on hour-long interviews with 30,000 consumers in 30 major economies around the world, the report saw only one of the top 10 global US-based firms increase its brand-power compared with a year earlier. This is the 5th year that the survey has been carried out and the first time that American companies have seen their brand-power start to sink.

Professor John Quelch, dean of the Harvard Business School believes that “Never before have global concerns about American foreign policy so threatened to change consumer behaviour. We are not speaking here of the frivolous grandstanding associated with temporary boycotts by a student minority. We are witnessing the emergence of a consumer lifestyle with broad international appeal that is grounded in a rejection of American capitalism, American foreign policy and Brand America.”13

Warning signals coming from within the American establishment

Writing in Morgan Stanley’s Global Economic Forum, Stephen Roach asserts that a “US-centric world” is unsustainable for the world-economy and bad in particular for the United States. He argues that the US will be unable to remake the world in its image and that the attempt to do so is distinctly negative from the point of view of large US investors. He believes the global economy is lopsided and “a weaker dollar may be the only way out.”14

Immanuel Wallerstein, one of America’s foremost scholars expects the dollar’s collapse and everything to change geopolitically. “The U.S. will no longer be able to live far beyond its means, to consume at the rest of the world’s expense. Americans may begin to feel what countries in the Third World feel when faced by IMF-imposed structural readjustment – a sharp downward thrust of their standard of living.15

The rest of the globe could topple the United States from its hegemonic status whenever they so choose with a concerted abandonment of the dollar standard. This is America’s pre-eminent, inescapable Achilles Heel for now and the foreseeable future. At the same time because Asian countries – the US’s main creditors – are so heavily invested in the US and while the US remains dependent on their investments, the dollar’s reserve currency standing is unlikely to be superseded in the near future.

In theory, the problems facing the US economy might still be corrected, but only in theory, because it is impossible to imagine such a dramatic policy reversal from Washington without some great crisis to provoke it. According to Greider, American leadership has instead become blind to the adverse balance of power accumulating against it.

1 The Real Reasons for the Upcoming War With Iraq – A Macroeconomic and Geostrategic Analysis of the Unspoken Truth, by W. Clark, 6 March 2003 www.indymedia.org
2 Iraq, The Dollar and the Euro by Hazel Henderson April 2003 http://www.hazelhenderson.com/Iraq,%20the%20Dollar%20and%20the%20Euro.htm
3 The End of Empire by William Greider http://www.thenation.com/doc.mhtml?i=20020923&s=greider
4 The bottom dollar – There is only one way to check American power and that is to support the euro
George Monbiot, Monday April 21 2003, The Guardian
5 The Fed is in a Dangerous Game with China by Chen Zhao, Financial Times, July 30, 2003
6 Is the US Trade Deficit Sustainable? Institute for International Economics, Washington DC, 1999.
7 See Finance & Development, Vol. 37, No. 1, March 2000. Can be downloaded from www.imf.org/external/pubs/ft/fandd/2000/03/mann.htm
8 ‘Current Account Adjustment in Industrialized Countries, ’ International Finance Discussion Paper No. 692, Board of Governors, Federal Reserve Board, Washington DC, December 2000. Available at http://www.federalreserve.gov/pubs/ifdp/2000/692/ifdp692.pdf
9 ‘When the Tide Goes Out’, European Investment Perspectives, Morgan Stanley, 13th February 2002. Also ‘Global Decoupling’ Global Economic Forum, Morgan Stanley, 30th January, 2002.

10 Europe Economics: Global Decoupling: Chaotic or Orderly?, Global Strategy Bulletin, Morgan Stanley, 17 February, 2002.
11 Empire and the Capitalists by Immanuel Wallerstein May 15, 2003 http://fbc.binghamton.edu/113en.htm
12 The bottom dollar – There is only one way to check American power and that is to support the Euro, George Monbiot, Monday April 21 2003, The Guardian
13 BRAND AMERICA: IRAQ’S CORPORATE COLLATERAL DAMAGE THE AGRIBUSINESS EXAMINER July 21, 2003, Issue #271
14 Empire and the Capitalists by Immanuel Wallerstein
15 ibid