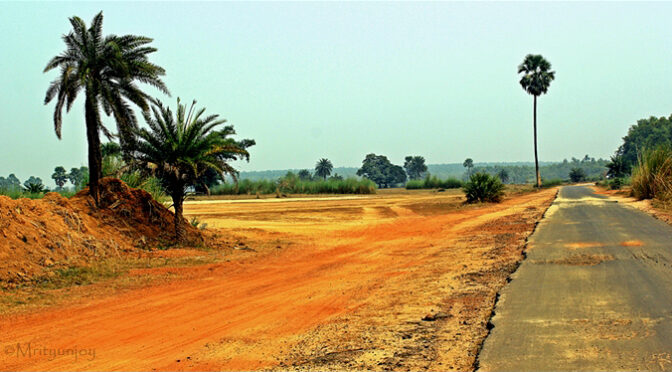 There was a great ocean, its surface agitated by rows of towering waves, an ocean which had neither name nor gotra [clan]. Who was there to name it, who was there to tell others about it? No one, because human beings had not yet come on earth. This was about 300 million years ago.(1) [And as regards the land mass,] there was no name yet on earth for that arid, mountainous terrain, nor even yet a single grove of trees to which a name could be given.(2)

After a long time this very terrain, this nameless mountainous terrain, was given the name Ráŕh. The word ráŕh originated in the ancient Austric language and means a land of red (laterite) soil. In the world of those days there was no Áryyávartta;(3) there were none of the plain lands of Bengal and the Deccan, nor were there the deserts of Rajasthan and Gujarat. The northern part of the Arabian Sea did not exist either; what existed was its southern part, which linked the Deccan peninsula with Africa, the Andamans, Malaysia, Indonesia and Australia. They were linked by [land] that lay sometimes a little above the water level, sometimes a little below.(4) In that world uninhabited by human beings, the Ráŕh of those days was older than any other land. The snow-covered mountains of Ráŕh gave birth to numerous rivers. These rivers, fed by melting snow, flowed some to the east and some to the southeast, towards the ocean.

Days passed, time passed, from beginninglessness to endlessness. Rainstorms and thunderbolts struck the mountains, and gradually the mountains diminished. Their snowy crowns fell off their heads, their height decreased. As the mountains became smaller and smaller through erosion, each river basin that lay between two mountains became higher. The undulating red soil that we see today in the west of Ráŕh, the undulation that advances ahead of us till it mingles in the remote blue, the undulation that gives a hint of some lost address as it recedes behind us – that undulating land is our Ráŕh.

The mountains were gradually eroding and were being transformed into sand and silt. This sand and silt, carried by the rivers of Ráŕh, formed eastern Ráŕh. This was lakhs and crores(6) of years ago.

The Himalayas were born many crores of years after the birth of Ráŕh.(7) From the Himalayas issued a daughter, the River Gauṋgá [Ganges], and a son, the River Brahamaputra.(8) The sand and silt their waters bore formed new soil; northern India and Báḿlá [Bengal] were formed.(9) The bed of the sea that was to the east of Ráŕh rose higher and higher thanks to that sand and silt, and – after the formation of eastern Ráŕh – long after – many lakhs of years after – formed a vast plain (samatal). That plain [to the east of eastern Ráŕh] is known as Samatat́a in the Sanskrit language and Bágŕi in the Bengali language. Farther to the east, the sand and silt borne by the rivers of Ráŕh mingled with the sand and silt of the Brahmaputra and formed Vauṋga,(10) or D́abák. The people of western Ráŕh migrated to eastern Ráŕh and set up habitation. This happened some lakhs of years ago. If human beings appeared a million years ago, then those inhabitants of the western Ráŕh of a million years ago found eastern Ráŕh to have been in a ready condition for them even before their birth. Even a portion of northern India arose before the origin of human beings. Samatat and D́abák, however, originated a little after the appearance on earth of humans. The people of western and eastern Ráŕh removed the forest cover and dwelt in Samatat-Vauṋga-D́abák.

We consider eastern Ráŕh to be, roughly, 1) western Murshidabad, 2) the northern part of Birbhum, 3) eastern Burdwan, 4) the whole of Hooghly, 5) the whole of Howrah, 6) eastern Midnapur and 7) the Indás Police Station(13) of Bankura District.

Human beings originated at a few particular points on this planet. Even without getting into a detailed discussion as to which humans appeared first and which appeared later, I can say that the origin of humankind in Ráŕh is very ancient. No trace can be found of any more ancient human habitation.(15) When forests appeared on earth, dense forests spread over the hard [e.g., granitic] rock, the metamorphic rock, the igneous rock and the sedimentary rock of Ráŕh. This very forest of that time provided vital nectar to Ráŕh as a human habitation. This very forest reined in the rivers of Ráŕh. Again, it was this forest, after the erosion of the snow-covered mountains, that invited rain clouds to Ráŕh. And the rain-god conferred his abundant and inexhaustible blessings on Ráŕh. This is our land of Ráŕh – a living onlooker to many a cycle of creation, preservation and destruction, a mute witness to a host of changes.

Countless were the wild creatures in the forests of Ráŕh. Human beings appeared on the soil of Ráŕh after the ice age had retreated from its heart. The enormous animals were gradually becoming smaller. The mammoths (aerávatas in Sanskrit) had been frozen in ice and fossilized, leaving behind elephants as their descendants. The age of gigantic dinosaurs, guntosaurs and kakt́esiyás was over, and other kinds of large animals took their place. The forest-dwellers of Ráŕh, clad in leaves, bark and animal skins, lived by hunting. The human beings of today may disregard them, but those people were the epitome of simplicity, they were the representatives of the undulating soil and the thunderous reverberation of Ráŕh, the underdeveloped humans of that time who were the revered ancestors of the people of today, and the dust of whose feet we touch to our heads as we march ahead.

Afterwards, those people learned how to tend animals, and slowly learned a little agriculture. The flaming colours of the palásh [Butea monosperma] forests in the month of Phálgun [mid-February to mid-March, when the palásh tree blooms] set their minds as well into a colourful dance. A fire for self-expression stirred their hearts as well. This was many thousands of years ago. Surely, they did practise tapasyá [suffering or austerity for the attainment of a certain goal]. But what was it for? How did they do it? Who taught them? No one but the Lord of their inner world, the Supreme Master of their life, taught them – “Search, search, someone is there – someone is coming – someone will give you what you need to journey forward, and help you properly direct your efforts to reach the target.” This was their nameless, silent tapasyá. When the Aryans started coming into India, at a time when some had already come, and some were about to start from the barren, arid lands of Central Asia – Lord Sadáshiva, that great personality, the life and soul of everyone, was born. The people of Ráŕh came in touch with His eternal gospel and infallible guidance and received the much-desired touch of the enlivening wand of their Abhiiśt́a.(16) Thus Ráŕh became the cradle of civilization.(17)

Ráŕh was not only the starting-point of civilization, Ráŕh represented the first-ever steps towards cultural progress. The intermingling of the basins of small and big rivers, and the exchange of activities and ideas, laid the foundation for the civilization and the culture of Ráŕh, whose splendour in turn ushered in a golden dawn not only in Ráŕh, but also in the life of all of the underdeveloped humanity of that dark age. People of many lands started converging on Ráŕh to hear the páiṋcajanya, the clarion call, of humanity, and to join in singing the paean of humanity. China called Ráŕh by the name of “Láti”, Greece called it “Gauṋgá Rid́i” and the Aryans called it “Rát́t́ha”. This civilization and culture of Ráŕh were not confined to Ráŕh alone – they could not be confined, and it would have been wrong to confine them. They sailed by sea from its port of Támralipta [modern Tamluk], responding to the call of its far-off nameless and unknown friends.

Though intellect is what makes a human being most venerable, oneʼs kśátra shakti [soldierly strength] and kśátra shaoryya [soldierly valour] can in no way be ignored. Vijaysingha, the son of Singhabahu the king of Singhapur(19) of southern Ráŕh, conquered Lanka [now Sri Lanka], and as a mark of his victory gave it the name Singhal. Pandu Basudev, the nephew of the sonless Vijaysingha, ascended the throne of Singhal in c. 534 BCE and conquered the south-western coast of India. The transplanted people of Bengal laid the foundation of the Nair society of Kerala. The Ráŕhii Brahmins of Bengal set sail for the coast of Konkan where they set up the Gaoŕiiya Sárasvata Brahmin society. Sahasrabahu, another prince of Singhapur, founded the Thailand dynasty and named the country Shyámdesh. None of the above went as a conqueror; wherever they went they became sons of the soil and merged with the local inhabitants. This is a matter of great joy. The superiority of Ráŕh did not lie, as a hidden agenda, in the conquest of those lands; it lay in devoting themselves to the service of those new places. This was Ráŕh – Ráŕh the starting-point of civilization.

[1] The Carboniferous Period of the Palaeozoic Era was 270-350 million years ago. –Trans.

[2] Seed plants first emerged during the Triassic Period of the Mesozoic Era, 210-250 million years ago. –Trans.

[3] Lit., “land of the Aryans”; northern India, which the Aryans at one point occupied. –Trans.

[7] As with northern India, where the Himalayas were to arise there was still sea. –Trans.

[8] The words “Gauṋgá” and “Brahamaputra” are feminine and masculine, respectively. –Trans.

[9] The name Ráŕh is not used for any modern political area. The Ráŕh area forms the western part of what is now Báḿlá. So strictly speaking the meaning here is “the rest of Báḿlá was formed”. –Trans.

[10] The term “Vauṋga” is sometimes used as a synonym for “Báḿlá”, “Bengal”; but at other times, as in this book, “Vauṋga” refers only to the easternmost part of Bengal – i.e., what is now basically eastern Bangladesh. –Trans.

[11] In these paragraphs the author defines the ancient areas of Samatat, eastern Ráŕh and western Ráŕh in terms of the districts of West Bengal, and regions adjoining West Bengal, that existed as of the composition of this book in 1981. Some of those districts have now been split up into various districts, while in other cases a few districts have been combined into one district. –Trans.

[12] The jurisdiction of a police station is often used in India to denote a geographical area. –Trans.

[14] “… the farthest eastern part was that part of Gondwanaland that people nowadays call Ráŕh.… Elsewhere [in Gondwanaland] it was extremely cold and full of snowstorms. There was no proper environment there for human beings to evolve. Ráŕh had the living touch of warmth so humans came there first.” (Shrii Prabhat Ranjan Sarkar, Shabda Cayaniká Part 1, “Apána” section) –Trans.

[15] The collective name of all a personʼs desiderata in the physical and psychic spheres, together with that personʼs Desideratum in the spiritual sphere. –Trans.