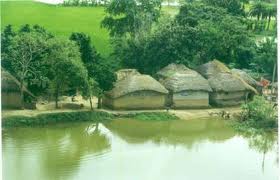 (10 February 1989, Calcutta) – Much can be done to develop the socio-economic potential of Bengal, but to do this you will have to know a great deal about the local area and put this knowledge to practical use. What are the main production towns in Bengal? What are the major cities – that is, which are the places with populations of more than 100,000 people? What is the source of the daily drinking water? Is it artesian water or rain water? Are there any hygiene problems among the people in these cities? What is the main source of income of the citizens there? And what is the source of their socio-economic livelihood? Is it based on agriculture, industry or commerce? To develop the local area, you will have to know the answers to questions such as these.

Let us briefly examine the economic potential of a few areas such as Birbhum district, Digha, and Bankura district.

“To develop the industrial potential of any region you should take into consideration factors such as the power and water reserves, the community problems, the land and soil conditions, the mixed farming potential, the availability of raw materials, and the development of local industries.”

About 1,200 years ago Upabanga or Shriibhum included Sylhet, Noakhali, Chattala and Tripura. Banga or Barak was situated on the eastern side of the Padma River, while Barendrabhum was situated on the northern side of the Padma. The original region of Bengal included five areas – Ráŕh, Samatat, Banga, Barendra and Mithila. Collectively these five areas were called “Pancha Gaur” or the “Five Sweet Lands”. Pancha means “five” and gaur means “sweet”.

After Caetanya Deva initiated the tribals of Tripura, they adopted the title Devaburman – deva came from Caetanya Deva, while burman means “tribal”. Mu-Chang-Fa, who originally led these tribals into Tripura from northern Burma, was greatly impressed by Caetanya’s philosophy and the Bengali language he spoke, so he and his royal court embraced Bengali culture.

In the Kamalpur block in Tripura the soil is composed of granite rock and is very suitable for the cultivation of cashew nuts and pineapples. Horticulture can best be developed in Sonamura, Belonia and Kamalpur blocks.

The topographical order of the entire state of Tripura is shaped like a saucer. Potatoes can be grown twice a year. Two types of potatoes can grow in Tripura – red skinned and white skinned.

What is the source of water in the Salema block in North Tripura? The block headquarters is in Kailasahar. The main source of water is the Dhalai River coming from Longthorai Hill. During the rainy season there is plenty of water, but in the dry season there is a shortage.
Now let us discuss Digha. Previously Digha was known as “Diirghaka” – diirgha means “long” and ka means “land” – then it became “Diirghá” and today it is “Digha”. Ramnagar, a town near Digha, was named after Ramnarayan Hata, the last maharaja of Midnapore district. Kánthi then became the district headquarters. The British moved their headquarters to Kánthi after a large storm engulfed Ramnagar, but they changed the name Kánthi to Contai as there was another district headquarters with a similar sounding name. The area around Digha used to be predominantly Buddhist.

The beach at Digha is the broadest in the world. Throughout Digha district along the seashore, there should be large-scale afforestation of samudric jhau trees to check oceanic storms. If these storms are checked, many types of plants can be grown successfully. Coconut grows especially well. If you travel by car about five kilometres west of Digha, there are dense forests along the coast. However, there is no stone retaining walls on the beach to stop the encroachment of sea. Approximately every seven years large storms come and wash away the trees, which is why many of the trees do not get a chance to grow very tall. If the trees are not replanted along the beach and no retaining walls are constructed, there will be much erosion and the intensity of the storms will not be checked.

The train line should go up to Bhograi, not just to Digha. At Bhograi, the Suvarnareka River merges into the sea. Bhograi is at present in Orissa. A port should be built there to export such commodities as coconut, fish, betel nut, betel leaf and good quality cashew nuts, rather than their going through the Calcutta Port. This will help the socio-economic development of the region. A marine drive should also be constructed along the length of the Digha beach to attract tourists and make its scenic beauty accessible to the people.

Finally, let us discuss Bankura district. The entire Bankura district can be divided into three categories. First, there is the Visnupur subdivision, excluding the Indus block. The soil in this area does not have much capacity to retain water. The land is neither completely plain nor wavy. The aman variety of paddy grows well, while áus paddy and boro paddy do not grow so well. Planning should provide for proper irrigation facilities and drainage.

Secondly, there is the Indus block. This area is plain land, but the soil cannot hold much water. It is very similar to the soil of the bordering Burdwan district. So the agricultural planning of this area should be undertaken together with Burdwan district. Agriculture is the main source of livelihood for the people in this area.

Thirdly, there is the Khatra subdivision and the remaining portion of Bankura district. Here the land is wavy and there are numerous scattered clusters of a few huts. The water flows down the sloping land quickly, and the water retaining capacity of the soil is low compared to the rest of the district. Proper planning for irrigation needs to be undertaken. The land is low in agricultural potentiality but it is rich in mineral wealth. In the southern portion of this area huge deposits of coal, mica, silver and copper can be found. The adjacent Manbhum area (which falls within Purulia district) also has huge reserves of copper. To the south of the road connecting Purulia and Bankura, huge deposits of minerals can be found. Industries based on these mineral resources should be properly planned and developed.

The soil in Bankura district is good for horticulture, so this industry should also be properly planned and organized. For example, grapes, sweet lemons, papayas and guavas grow very well. The soil around Taldanga block is good for the cultivation of gourd. The entire area should be divided according to the potential of agriculture, horticulture and minerals. Developmental planning should be formulated accordingly.

The state language of the Arakan range was Bengali, which was introduced by the poet Syed Mohammed Alaoal who lived in the Belonia district of Bangladesh.

In Howrah district the silk industry is not in good condition, and most of the silk now comes from Malda district. Mango has not been developed into an industry. In Amta block in Howrah district, Kendua or Kendermath is a large fertile area which has ideal paddy land. Is there scope to develop any new large-scale or medium-scale industries in Amta subdivision? What are the rivers in this area? Is the source of water perennial? What is the socio-economic condition of your block?

In Badampahar, in the Bhanjabhum area of Keonjahar district in Orissa, there are reserves of iron ore. The maharaja of that area started a narrow gauge train to transport iron ore. Today the Tata Company still utilizes the same train to carry iron ore. There is also a plentiful supply of babui grass, which is being used to make rope by the local people. It can also be used to manufacture paper. The mother tongue of the Mahatos in Bhanjabhum is suppressed.

To develop the industrial potential of any region you should take into consideration factors such as the power and water reserves, the community problems, the land and soil conditions, the mixed farming potential, the availability of raw materials, and the development of local industries.

Other material on Bengal, Development: