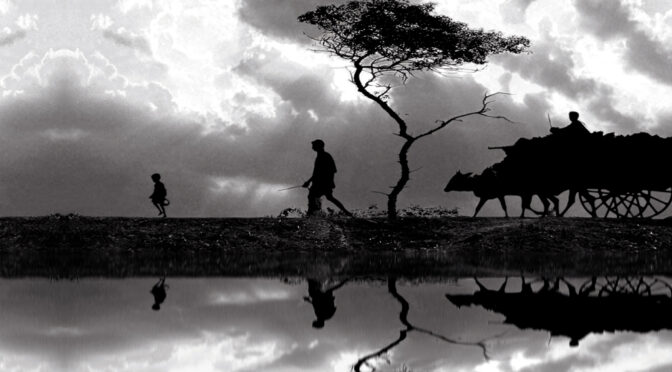 When human beings first appeared on earth, that was the Shúdra Age. Ráŕh was no exception. When the people of that age all began to feel that they should live collectively in order to fight against the obstacles and dangers of their adverse environment, they began to search for a chieftain. At the initial stage, a woman used to be the chieftain. Even though she may not have had to do anything, she served as a symbol of group-oriented living – just like a queen ant or a queen bee or a queen white ant. In this way there emerged the ancient matriarchal society. When, later on, it made way for the patriarchal society – when it became evident that a patriarchal society [patrilineal order] was necessary for determining the lineage of the children – males began to assume the roles of chieftains. These chieftains used to be called, in more polished language, rájás [kings]. Ráŕh too saw the emergence of patriarchal society. But it was slightly different than in other parts of the world. In most countries, where the society was matriarchal, the matrilineal order of lineage prevailed, and where the society was patriarchal, the patrilineal order prevailed. Though Ráŕhʼs present social system is patriarchal, the systems of lineage and right to perform the last rites, and, in some cases, inheritance, are not completely patrilineal. What is found is a beautiful mixture of the patrilineal and matrilineal orders.

The male-dominated society is followed by the Kśatriya Age. At the initial stage there is only the kśatriyasʼ shásan [control and administration], but later comes shośań [exploitation] as well. During the Kśatriya Age, if the populace can flatter their king, they can pass their days happily. But when the Vaeshya Age eventually follows, peopleʼs very existence becomes unbearable. The Kśatriya Age lasted for a long time in Ráŕh. But soon after the fall of local kingdoms, the Vaeshya Age with all its ruthlessness tightened its noose around the people of Ráŕh. There being no way out, the hapless people of Ráŕh, like the people of other countries in the world, gave in to the exploitation of the Vaeshya Age.

Today a heavy load of exploitation is breaking the backs of the people of Ráŕh. To save Ráŕh without delay, an all-round socio-economic rehabilitation plan is needed. Ráŕh is filled with natureʼs inexhaustible store, and yet the people of Ráŕh are not able to eat their fill of nutritious food. What a heart-rending sight! It may not be possible for the present inhabitants of Ráŕh alone to do all that is necessary to save their land from this miserable plight. So those from outside Ráŕh must also come forward to help Ráŕh, otherwise a highly-civilized and cultured human population will be ruined.

Ráŕh appears emaciated from starvation, miserably struck by misfortune, and chained with slumber because of the lack of proper consciousness regarding the need of the hour. Let all rational persons of the world think collectively about Ráŕhʼs distress, and let them come forward with their help to build up Ráŕh.

Ráŕh is the starting-point of human civilization, Ráŕh is the hub of human culture. Let that Ráŕh shine again in its own glory. Let that Ráŕh again brim over with fruits, flowers, treasures, humanity and spirituality. Let the shroud of mist obscuring Ráŕhʼs path of progress blow away, let Ráŕhʼs melancholy face brighten with a smile. With these good wishes, let me conclude.

Other material on Bengal, Bihar, Exploitation: