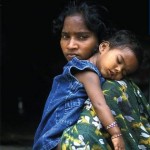 P.R. Sarkar
The socio-economic environment of society today is extremely restless and disturbed. In this abnormal environment population growth has been projected as a menacing threat to the existence of human society, but in fact this sort of propaganda is nothing but an evil conspiracy engineered by vested interests. No problem is greater than the human capacity to solve it. Like all problems confronting humanity, the problem of population growth should be tackled and solved in a proper way.

In the natural course of evolution, birth and death maintain the continuity of the never ending flow of creation. Every day, with the birth of babies, the parents and the other family members naturally enjoy great happiness. But it is a matter of sorrow that there are some people in the government or other spheres of public life who consider the increase in the birth rate a curse on the society. This negative attitude is definitely a blot on the human race, which has achieved a degree of intellectual development and scientific knowledge.

Is the population problem really a natural problem? The population problem should be considered in the context of two vital factors — the availability of food and the availability of space. Today human beings have sufficient means to manage their food. The earth is abundant enough in food resources to feed many times more than the present population. Due to lack of coordinated cooperation, collective effort, a proper ideology and sound planning, society has been fragmented into many belligerent groups and sub-groups, and rich and poor nations have been created. As a result of this fissiparous tendency, society is presently incapable of producing enough food to meet human requirements. The tragedy is that even though there are enough resources to supply nutritious food to all the human beings on the planet, due to the defective socio-economic systems, an efficient method of distribution has not been developed.

Moreover, there is no shortage of living space on the planet if the existing space is properly utilized. Because the earth has been balkanized due to so many arbitrary social, economic and political restrictions and the pervasive influence of evil dogma, people are unable to tackle problems in a natural way. If there were maximum utilization and rational distribution of all natural resources, pressing socio-economic problems could be easily solved.

It is a law of nature that a mother is provided with sufficient breast milk to feed her newly born baby. In the same way nature has generously provided sufficient resources to meet the food and other essential requirements of all human beings. People need to utilize these natural resources in a proper way. Shortages of food or space cannot be blamed on nature. These problems are essentially the results of the mistakes made by human beings.

It is a fact that the population of the world is rapidly increasing, and consequently many people have become frightened. In capitalist countries there are sufficient reasons for such fear. In these countries an increase in the population means a corresponding increase in the poverty of the people. But there is no reason for such fear in a collective economic system. In the event of shortages in food and accommodation people will collectively convert barren land into arable land, increase agricultural production by scientific methods and produce food by chemical processes using the potentiality of earth, water and air. And if this earth loses its productivity, then human beings will migrate to other planets and satellites and settle there.

If people living in capitalist countries voluntarily adopt birth control methods to avoid economic hardship, perhaps we should not criticize them. But it should be mentioned here that using birth control methods which deform the bodies of men and women or destroy their reproductive powers forever cannot be supported, because this may cause a violent mental reaction at any moment.

Under the present socio-economic conditions, PROUT advocates a comprehensive, clear-cut policy to tackle the population problem. According to PROUT, population growth will automatically find a natural level if the following four factors exist in society.

First, there should be economic liberty in society so that people may get a nutritious diet. In Scandinavia, for example, the purchasing capacity of the people is high and they enjoy a good standard of living. Because of this they do not face the problem of overpopulation.

Secondly, everybody should have the right to enjoy sound health. If people have a healthy body and mind their glandular system will remain balanced, and they can easily transform their physical energy into psychic energy and their psychic energy into spiritual energy. Through this effort of channelizing the mind in a spiritual direction, the baser mental propensities are easily controlled.

Thirdly, people should be free from unnecessary mental worries and anxieties. When one suffers from mental agonies continually, the mind naturally indulges in baser physical enjoyment to get rid of that unwanted condition. When mental agonies disappear, human beings will enjoy peace of mind and be able to assimilate subtle ideas.

Fourthly, the intellectual standard of humanity will have to be elevated. With intellectual advancement human beings will develop their all-round psychic potentiality and can easily evolve their psycho-spiritual potentiality. Through continuous effort human beings will be able to attain the supreme stance, merging their individual unit existence into Cosmic existence.

Good varieties of seed, fertile land, adequate nourishment, light, air and water are all essential for good reproduction in both the plant and animal kingdoms. In this respect human beings are no different from other creatures. In human society the selection of suitable males and females is desirable for reproduction of a high order. Until human beings are produced in scientific laboratories, it will be detrimental to society if this matter is neglected.

If people of sublime intelligence and brilliance reproduce more offspring, it will be very beneficial for society. The responsibility for nurturing and bringing up these children will have to be taken by the society or the government. Similarly, it will be harmful for society if mentally deficient, naturally delinquent or insane persons produce many children. In fact, society will be benefited by the permanent destruction of their reproductive capacity, providing this does not cause any harmful reaction.

Science has reached such a stage that it can usher in a new era. It can produce synthetic food in the form of tablets to help solve the food problems of the world. A single food tablet can be sufficient to provide sustenance for a whole day, so we need not fear population increases. Future generations will spend more of their time and energy on subtle psychic and spiritual activities, so their demand for physical food will decrease.

Through oceanographic research abundant food resources have been discovered within the ocean and on the sea bed. With the application of science and technology we can harness these resources to meet the challenge of the food problem. The crisis faced by society today indicates that humanity is not encouraging the maximum utilization and rational distribution of the world’s potentialities. Science today is being used to develop increasingly destructive weapons of war rather than for benevolent and constructive purposes.

Society will have to adopt a collective economic system for maximum production and economic security in order to control accumulation; ensure the rational distribution of collective wealth through a well-knit cooperative system; implement decentralized socio-economic planning; and secure the maximum utilization of all types of mundane, supramundane and spiritual potentialities. So far society has not adopted such an approach so it has been unable to solve the food problem.

Instead, certain inhuman birth control practices have been forcibly promoted. Not only are such practices detrimental to a healthy human body and mind, they cause physical deformity, disturbances and misunderstandings in family life, and mental derangement and debility. Those inflicted with such psychic ailments lose the courage to face adversity in life and the power to fight for social justice.

Imposing a fear of population growth is nothing but a cunning conspiracy by vested interests to misguide people and exploit society. Optimistic people throughout the world will have to unite and raise their voices against such a heinous conspiracy, and work together to construct a just and benevolent society.

Other material on Development: