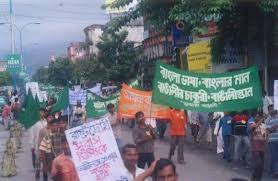 (30 August 1988, Calcutta) – The Gorkhaland movement, which is demanding a few districts in the northern part of West Bengal, has reached a climax. The Gorkhas, who had settled there from outside the state, are now demanding the formation of a separate state by taking advantage of their Indian citizenship. They have launched regular agitations, called strikes, looted, plundered, burnt property, murdered and virtually brought the law and order situation to a stand still. In fact, the barbaric call for “An eye for an eye” has been the dominant political slogan, and now there is no rule of law in the Darjeeling district of West Bengal.

The Government of West Bengal has failed to curb this secessionist movement. Its only business is to divert this movement into animosity against the Central Government to try and procure some advantage in the elections. Whatever may be the objectives of the communists, the people of West Bengal have understood their selfish intentions. The law-abiding citizens of West Bengal are extremely concerned with the rapes, murders, police firings and large-scale violence which has occurred recently.

“Let the historic role of the communist party vis-a-vis
the Gorkhaland movement be exposed!”

In fact, the Gorkhaland issue is not an isolated political problem of a particular ethnic community, but an artificial issue initially created by the undivided Communist Party of India and their agents. In 1977 the Marxists, with the sole intention of grabbing political power in West Bengal, began to arouse the Gorkha sentiment by demanding autonomy for the Gorkhas and the recognition of the Gorkhali language. The foolish, narrow-minded politcal leaders could not realize that their spurious policies would one day boomerang on them. Strangely, the communists are now trying to avoid the poisonous tree of Gorkhaland which they themselves planted. With their characteristic cunningness, they are trying to mislead the population of West Bengal by claiming that the Central Government is inspiring this secessionist movement.

Let the historic role of the communist party vis-a-vis the Gorkhaland movement be exposed! In 1947 the Communist Party, in collaboration with the communal and secessionist Muslim League, raised the slogan for the partition of West Bengal. At the same time they also raised the slogan for the formation of a separate land for the Gorkhas. In fact, the term “Gorkhaland” is 40 years old and was last used by the Indian communists. The communist party demanded that Gorkhaland should comprise Sikhim, parts of Nepal and a few districts of North Bengal, including Darjeeling. This would be the separate homeland of the Gorkhas. In order to create a solid political base amongst the Gorkhas, the communists raised the Gorkhaland issue, but at that time the movement was not very effective.

In 1977, when the communists came to power in West Bengal, the old political leaders of the Marxist Communist Party revived the old Gorkhaland sentiment which has now transformed the northern part of the state into a land of utter chaos and bloodshed. Innocent, peace-loving Bengalees are now fleeing from their houses in Darjeeling in terror, and becoming refugees in the adjoining districts of Coochbihar, Jalpaiguri, etc. In their home state, the Bengalees are virtually refugees. But the Gorkhas, who are the real outsiders, are demanding that the Bengalees quit Darjeeling.

The Lepchas and Bhutias – the original inhabitants of Darjeeling district – belong to the Coch tribe. The Coch people are the original Bengalees. A part of their population settled on both sides of the Saḿcoch River in Sikhim and Bhutan, and another group migrated from Barendrabhum, the northernmost part of Bengal, and settled in the hilly regions further north. The Lepchas and Bhutias have always remained associated with the mainstream of Bengali life and culture. The Gorkhas are clearly the outsiders.

About 200 years ago, the Gorkhas came from outside Bengal in search of a livelihood and began to settle in the Darjeeling hills. According to the 1872 census report, their number was so negligible that they were too inconsequential to be recorded, and it was merely mentioned that they were outsiders. The upper hilly regions were inhabited by the Lepchas and Bhutias, and the plains were inhabited by the Bengalees.

In addition, a major percentage of the population who introduce themselves as the Nepalese and live in the Darjeeling hills are not Gorkhas at all. 15 Nepali ethnic groups like the Tamang, Gurung, Newari, etc. live in the Darjeeling area. They are not Gorkhas nor is their language Gorkhali. In fact, Gorkhali is a dialect of a very small community. Just as there is no language called the Indian language – in India there are as many as 323 major or minor languages and dialects and all these languages are Indian languages – likewise in Nepal there are about 32 languages and dialects, and each of them is a Nepali language. Gorkhali is not even the official language of Nepal. The Gorkhas, though a small ethnic community, have demanded Gorkhaland to fulfil their petty selfish interests, misleading the other simple, innocent tribes living in the Darjeeling hills.

There is no historical, social or economic justification behind the Gorkhaland movement. The Lepchas and Bhutias who are the children of the soil, outnumber the Ghorkas. So, those who are raising the bogey of Ghorkhaland have only blackened their hands in a dangerous political game. Just as the Gorkhali language is the language of a small minority and should not be imposed upon a large community, similarly the Gorkas are a small community who live in the Darjeeling hills and should not be allowed to indulge in provocative politics. Such politics have been operating for the last 40 years behind the Gorkhaland movement. The Gorkhas who departed from Shikim, Bhutan and Assam gathered in the Darjeeling hills. The Left Front Government of West Bengal has cleared the jungles and built settlements for them, and declared Gorkhali the official language. It is the Marxists who have induced the Gorkhas to raise the bogey of a Gorkha homeland. This is an example of the dangerous, nasty politics practised by the Marxists in Bengal.

Tripura does not come within the scope of these constitutional provisions, but despite this the communist party tried to exploit the situation there. It passed the Tribal Hill Council Bill by abusing its powers in the assembly. This bill violates the provisions of the Indian constitution and is ultravires to the people of India.

In Bengal the Gorkha Hill Council in Darjeeling is also against the provisions of the Indian constitution because the Gorkhas are not tribals. The pact between certain selfish communist leaders and the Gorkha chiefs is not only illegal but unconstitutional. Constitutionally, the Gorkhas do not enjoy the rights specified in the Gorkha Hill Council Act. Those who signed this pact have betrayed universal fraternity. The Government-Gorkha pact has nothing to do with the tribals, and from this point of view it is illegal and unconstitutional. It will not be upheld in the Supreme Court if a proper judgement is given.