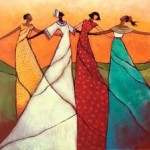 P.R. Sarkar
In the practical sphere PROUT adopts the common factors amidst divergent views, and imposes these common factors on groups or bodies with conflicting interests by discouraging fissiparous tendencies. Thus PROUT advocates unity and synthesis in the face of diversity.

If we analyse recent historical developments we can see that wherever fissiparous tendencies arise and are allowed to dominate social life, disunity and exploitation result. Let us take some examples.

While PROUT advocates that all people have the right to settle anywhere in the universe, it may be questioned whether the Chinese infiltration of Tibet can be supported on this ground. The reply is definitely “no” because this is an intentional infiltration – it is an expansionist move.

Similarly should one support Nepalese expansion in the eastern states of Sikkim and Bhutan? If we trace back through history we find that the Nepalese migrated from Nepal because of famine and for no other reason. Hence, this migration should not be criticized. However, recently a few persons have started a “Maha Nepal” movement. The propagandists of Maha Nepal are neither the friends of Nepal nor of India. The reaction to this movement will go against the interests of Nepalese settlers. By using the same logic as these protagonists India may also claim the Bhojpuri, Maithili and Bengali speaking areas of Nepal Terai. But such a situation would certainly be undesirable.

The case of the Jews who expanded into Palestine is similar. Palestine originally belonged to the Jews and the Arabs drove them out.

Likewise, the Pakistan infiltration into India cannot be treated as a justified move. The planned way in which this infiltration is going on indicates that it is motivated by expansionism.

A proposal to form India into a confederation consisting of three zones was put forward by Sir Stafford Cripps before independence. Of these zones, one would consist of Assam and Bengal, another of the Punjab, Baluchistan, the Frontier Province and Sind, and the third of the remaining parts of undivided India and called “India”. The Muslims accepted this proposal because they knew that they would outnumber other communities in the two zones besides “India” within a short period. However, the Assamese did not agree to this proposal.

In the western corner of India there is a move for Punjabi Suba. This is the outcome of the cry for linguistic states by some respectable all-India leaders. These leaders noted that certain other leaders are sympathetic to Muslims, so they proclaimed Punjabi Suba. Their intention is to create an independent Punjab. In the past they launched a campaign for Sikhistan. However, large numbers of Sikhs only live in the northern and western Punjab. Moreover, there is practically no difference between Hindus and Sikhs as they speak the same language and are guided by the same Hindu Code. Before independence there were 57% Muslims, 30% Hindus and 13% Sikhs in the Punjab. Now there are 70% Hindus and 30% Sikhs. The demand for Punjab Suba, though inwardly communal in character, outwardly appears to be a demand for a linguistic state. Those leaders who once supported the idea of a linguistic state are now afraid of the demands of the Sikhs. This is a funny occurrence indeed!

Fissiparous forces always create disunity and exploitation in collective life. To counteract these fissiparous forces, PROUT encourages those common factors amidst divergent views which lead to unity and synthesis.

Other material on One human society, Samaj: