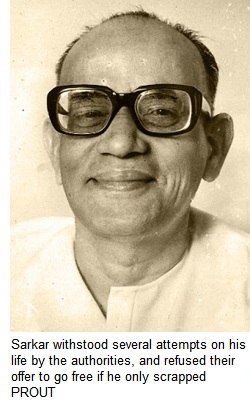 Amongst the inimical forces, there are certain parties which are goaded by certain forces, by the spirit of certain fissiparous tendencies, and there are also some persons goaded by these fissiparous forces. How can this problem be solved? How can we check these belligerent parties from implementing their outdated ideas, which may cause the physical disintegration of the country? What should be done? What should be our short term and the long term policy? The approach should be both physical and psychic. Will simply economic theory do or is something more required? Education is a long term programme. What should be done immediately in the physical and psychic realms? The country is passing through a critical juncture, so you should be well educated.

There is a theory of politics called “divide and rule”. Just to undermine the independence of India, the British government started a programme to encourage communal division amongst the people based on caste, scheduled caste, scheduled tribe, Muslim and non-Muslim. They wanted to encourage divisions between Muslims and non-Muslims. General people, scheduled castes and scheduled tribes – these were the divisions. Our leaders should not have accepted such divisions. Rather, at that time they should have said that preference should be given on the basis of socio-economic backwardness, not on the basis of castes or creeds. But certain political parties were based on caste prejudices or communal sentiments, which is why they supported the British government.

During the struggle for independence, a great blunder was committed by Mahatma Gandhi. In order to show his innocence, he said that he would not support the communal award, but nor would he vote against it. That is, indirectly he supported it. What happened to the country after this was due to the himalayan blunder committed by Mahatma Gandhi. At that time he should have said, “No. I do not support the communal award.” He did not say this because his party workers and party leaders were eager to become ministers, so they pressed him for provincial autonomy. But Mahatma Gandhi neither supported it nor opposed it. He committed a great blunder. What has happened in the country after this is the result of what Mahatma Gandhi did. At that time he should have said that we can neither split the country nor disintegrate it. As a result of the communal award, the country was trifurcated into Pakistan, India and Bangladesh. This was the result of the blunder of Mahatma Gandhi, and he did it under the pressure of his party leaders. They wanted to become ministers, as there was scope in the government of India at that time for wresting provincial autonomy, attaining ministership, creating two new provinces – Orissa and Sind – and separating Ceylon and Burma from India.

Provincial autonomy was promulgated in the year 1935, but it was implemented in 1937. Sind agreed to provincial autonomy because in Sind a particular party, a minority party of India, was in the majority. Orissa was created out of physical convenience rather than mental necessity. It was very difficult for the people of Orissa to go to the capital town Patna, as they had to go to Patna through Calcutta. This is why they demanded that either Orissa should be included in Bengal, or there should be a sepa rate province. Their demand was that Orissa should not remain in Bihar, because in order to go to Patna the people had to travel through Calcutta. The creation of Orissa was not bad, but the creation of Sind was bad. These were the poisonous effects of the enactment of provincial autonomy by the Government of India in 1935.

As an example of the communal approach of the Government of India, take the case of Bengal. At that time reservation in the Bengal assembly was for 250 seats. 250 seats were created as part of provincial autonomy. Of these 250 seats, 120 were for Muslims, 80 were for non-Muslims, 25 were for British merchants – for the British businessmen of Calcutta to contest elections – a few were for Zaminders, a few were for universities, and a few were for labour leaders. The total: 250. In Bengal at that time, 45% of the population was Muslim and 55% was non-Muslim. That is, the land of Bengal was not only physically divided but also mentally divided, as a result of which Bengal was divided on the basis of communal consciousness, which is unnatural. Communalism is unnat ural. Again today, the foolish leaders, the political leaders, are encouraging this very sentiment. And I fear that if it is not controlled in the proper time – it is the most opportune moment to control it – if it is not controlled in the proper time, the country will face further disintegration.

The policy was divide and rule. One party said “Jai Hind” and another party said “Takasime Hind.” One party said “Victory to India;” another party said “Divide India.” These were the slogans of the time. It was not a healthy atmosphere. This sentiment was not even geo-sentiment. It was based on emotion and mean selfishness. Henceforward, healthy politics disappeared from India. Nehru supported partition because his dream was to become Prime Minister of the land – of either undivided India or divided India.

Montague Chelmsford saw that the forces were divided and was not sure whom to give power to. In 1935, provincial autonomy was granted. Ceylon and Burma, which were parts of India, are now inimical to India. During partition – during Montague Chelmsford’s time or during 1935 – the Government of India granted autonomy. A senior Muslim leader of India pronounced Montague Chelmsford as “Montague Chilamford” because he could not pronounce “Chelmsford.” At that time there was no mutual faith, there was want of mutual understanding. That is why the country was divided. Otherwise, the British could not have divided the country. There was both physical disintegration and psychic – psycho-social – disintegration for want of proper education.

Most of the minorities could not rely on the Hindu majority of the country. That is why – out of fear complex – they wanted to divide the country. The Hindu minorities of Bengal and the Punjab could not rely on the Muslim majority. That is why they wanted the partition of those two provinces. The same psychology is prevalent today. At that time there was not even a wee bit of political education or political consciousness in the country.

Serpents are exhaling venom everywhere. Now at this critical juncture, should we go on preaching the gospels of peace? No, no, no, no! So, before my departure from the world, said Rabindranath, I have made the necessary preparations for the fight against these demons. Do you all follow? What Rabindranath said 60 years ago is also true in this last portion of the twentieth century.