Garda Ghista
(Hyderbad, India Dec 10, 2009) – The Times of India on December 7 reported that Dalits in Gujarat are banned from Hindu temples. Yet, they are Hindu, isn’t it? If they are banned from their own Hindu temples, then why on earth should they remain Hindus? Better they become Buddhist, Christian or Muslim. Tragically, even by converting to one of these other religions, they remain Dalits. We have here in India such a thing as Dalit Christians and upper caste Christians. Is it not mad? If I tell this to friends back in America, their jaws will drop in disbelief. 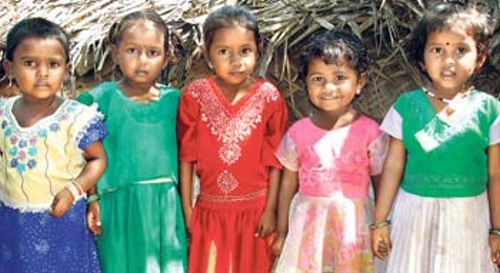 Children belonging to a sub-sect of Dalits barred from attending
classes and partaking in a government-sponsored nutritious meal
program in Therkupatti village in the Indian state of Tamil Nadu,
according to reports

In a study conducted by the Ahmedabad-based Navsarjan Trust in conjunction with the Kroc Institute for International Peace Studies at University of Notre Dame, Indiana, Dartmouth College at the University of Michigan and the Robert F. Kennedy Centre for Social Justice and Human rights, Wash. D.C., covering 98,000 Dalits from 1,655 villages in Gujarat, 97 percent of respondents say they do not feel able to enter a Hindu temple. Ninety-five years ago Gandhi invited a Dalit to his ashram and immediately others stayed away and donations dried up. Did nothing change in 95 years? Even at satsangs and kathas Dalits are not permitted to sit on couches and chairs with the upper castes. No one tells them. It is just understood. The same study documents 99 different forms of untouchability still practiced in Indian villages. According to retired JNU Professor Ghanshyan Shah, Dalits face untouchability primarily in religious affairs. In fact, Hinduism is the origin of the caste system.

Another form of untouchability continues in Gujarat specifically, which is that Dalits have to drink tea in separate cups from the upper castes.. The non-Dalits keep a separate tea cup for Dalits outside their house. This outrage has been continuing for centuries, it seems, the only difference being that earlier the cups were made of clay and today they are made of steel. If it is in public, Dalits are given tea in disposable cups, while non-Dalits get tea in ceramic cups. Dalit women are not allowed to touch the vegetables at the bazaar. The vegetable man will see what she wants, then he throws them into the hollow of her saree. There’s more. Some higher caste people will tell you that not once in their life did they shake hands with a Dalit.

The same census tells us that Dalit children are shamed at mid-day meals by being forced to eat separately. Children from higher castes avoid taking lunch with Dalits. Dalit children are banned from participating in any school cultural events. The Valmiki untouchable caste children are made to clean the school toilets. What is appalling is that adults, millions of them all over India, from the higher castes, will claim that there is no more casteism in India. Yet, if any of the above instances happened in America, you can be sure that parents would be filing law suits against the school. Not only that, they would win in court and receive millions of dollars in damages. In certain ways, such as dropping depleted uranium weapons and weapons from manless drones on defenseless, helpless villagers, America is certainly an uncivilized country. But what do we call this kind of discrimination found in India today? It is just like the racism of the early 20th century in America, where blacks were marching on the streets of Mississippi and Alabama for justice and whites were busy declaring that racism doesn’t exist in America. So in this regard, India is no different than America was 80 years ago.

Recently Tehelka magazine published news telling about a new Dalit organization in Kerala called Dalit Human Rights Movement (DHRM). According to the report, they were holding regular study circles at which they would sit and discuss all the teachings of Dr. Ambedkar. The goal was to raise social and political consciousness among Dalits. Suddenly on September 29th the Kerala police arrested scores of DHRM members and many others have gone underground. The police claim that the DHRM members have terrorist links. But what is the reality? We don’t know for sure. But we do know that any time an oppressed segment of the population tries to stand on its feet and demand dignity, the forces in power, the forces that keep them oppressed, immediately trounce on them and crush them until they are once again fearful and silent. But for those who long for a just society, a society based on social equality, it is most painful to listen to their silence. On this issue, the propounder of Neohumanism, Shrii Prabhat Ranjan Sarkar, says:

“Feelings of differentiation are a great impediment in the spiritual practice for the Infinite. The feeling that a particular person is a Muslim, another a Hindu, yet another a Brahmin-caste, and the fourth a capitalist, are mean thoughts. When every living being is a manifestation of the Supreme Consciousness, how can you know yourself without shedding these differentiating feelings?”

After centuries of casteism in India, still we have millions here who feel superior to others based on their caste alone. They may be scoundrels and thieves, they may be corrupt to the core. But the only thing that matters here is the name, which indicates the caste. It is a mad country, this India. Then those higher castes proceed to inflict all sorts of indignities and sufferings on the lower castes. Yet is it not comical? Because if we stop to reflect a bit on biological and anthropological facts, we are bound to admit that all of us originated from monkeys. All of us, higher castes, lower castes, Dalits, Christians, Muslims, Hindus, Americans, Germans – all of us evolved from monkeys. So then, for those who have studied a bit of biology in their school days, is it not mad that they place so much importance on caste? Do we have Brahmin monkeys and Dalit monkeys then? The actual commonalities of human beings are that all have the same biological, instinctive traits of love and affection, pleasure and pain, hunger and thirst. Realizing these commonalities that cross all oceans, all national borders, we should consider that the time has come to relegate caste to the history museum.

Why is there no discussion in our mainstream media about something called social synthesis, about people from all walks of life coming together and feeling close to one another? It is time now that we view each person as a flower in a garden full of hundreds of varieties of flowers, all forming a one gloriously beautiful bouquet. Those who love humanity should be publicly encouraging these flowers, some vastly different in appearance or race or sect, to mix freely with one another, and above all to marry and merge, so that those who are adamant to remain only with their own caste will become helpless to find their own caste due to huge numbers of intermarriages and children becoming casteless. We should welcome a future in India where racial and sectarian injustice becomes an unknown entity, where microscopic differences between human beings will no longer be noticed, and where only one family is recognized, called the human family. Let us again recall the words of Shrii Prabhat R. Sarkar:

“The subterranean flow of love and affection exists in all hearts alike. Every person cries out in pain, everyone feels pleasure when there are occasions of joy and happiness. Maybe in different geographical, cultural, social and other environments, the lifestyle of different human groups may vary; maybe, a few special psychic traits in those groups may assert themselves, but fundamentally, their mental existences flow along the same channels of ideas and consciousness. Containing the same cosmic momentum and under the same cosmic inspiration, they all have set out for a tryst with the same Destiny.”

Other material on Casteism, One human society: