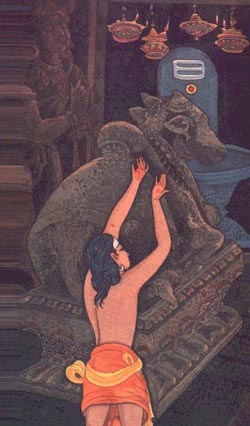 Nandanar was born in the Dalit slum village of Athanur of Tamil Nadu. He is known as the first hero in the Dalit resistance struggle. Nandanar lived in a time when Dalit voices were never heard in social life. It was an era in which Dalits gained only partial freedom by converting to Buddhism or Jainism. However for Dalits trapped in the grip of the Puranic, Hindu religion, not only were they never to be heard, they were considered too vile to ever be seen by the rest of society. Many Dalits have criticized Nandanar because spiritually he never attained realization to go beyond the worship of stone idols. Socially also he is criticized for his meek begging from arrogant brahmins to be allowed to worship the idol of Shiva in the temple city of Chidambaram.

Such critics fail to realize that for the first time in history a Dalit tried to enter a Brahmin temple. For a Dalit, it was a crime to even step foot in the urban complex of Chidambaram. This was an act of unbounded courage, since for most Dalits it meant instant murder by the upper castes. Second, all Dalits are forever indebted to Nandanar, because he won for them their very first freedom – the freedom to sing. Even if he only sang of his pain as a Dalit and his longing for Shiva, still for the first time a Dalit voice was heard in India. Before Nandanar, Dalit voices were completely silenced in social and cultural life. Nandanar, by the overwhelming power of his devotion, by the sublime sweetness of his Tamil, compelled Indian society and Indian literature to accept the entrance of a great Dalit devotee. It was a historic first for Dalits.

While it is true that Nandanar did not transcend the superstitious stone idol worship of his times, his bhakti transcends the bhakti of any Dalit of the 20th century. Moreover Nandanar was the first Dalit martyr. The Brahmins of Chidambaram, afraid of the power of his devotional songs in the society, set him on fire and burned him to death. Yet even in death Nandanar was victorious.

The people of Tamil Nadu never forgot the devotional sublimity of his songs. Even Brahmin writers were forced to acknowledge the devotional greatness and sanctity of Nandanar. This in itself was a revolution in the Dark Age of the Puranic regime.