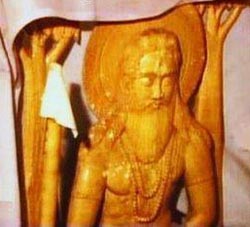 Ghasidas followed in the footsteps of Ravidas. While Ravidas stayed within Kashi, Ghasidas travelled on foot throughout Chhattisgarh, teaching. He taught the exploited Dalits to develop moral discipline and to liberate themselves socially and spiritually with his Satnam spirituality.

The exact teachings of Ghasidas are unknown, but the merit of any social movement is to be judged not by its books but in its legacy of revolutionary struggle. In 1672 the first known Dalit military revolution in Indian history took place in Narnaul, Harayana – an event that can never be forgotten. It was a revolution that influenced the social ideology of Banda Singh Bahadur and Sikh ideology in general. The Satnamis had been facing the violent raids of the casteist, Peshwa Marathas, in addition to being ground down by Mughal-Bania exploitation. One incident of Mughal oppression became a match to the gunpowder of endless injustice. The Satnamis took over large tracts of land where they created a social revolution, removing Zamindar-Bania dictatorship.

Today we see how the CMAS (Chasi Mulia Adivasi Sangh) adivasis in Orissa similarly attempted to throw out their corporate exploiters and create a small-scale socio-economic revolt. Just as Aurangzeb demonized the Satnamis as kaffirs, so also the MOUist* Central Government in India demonizes all those who resist exploitation as Maoists or terrorists. When we see the current reign of terror in Chhattisgarh, the karmabhumii (legacy-lands) of Sant Ghasidas and Shrii Sarkar, we can only bury our heads in shame that despite our so-called education we do not have the same integrity and courage (tejasviita) of the Satnamiis.

*MOUist is a term created by Arundhati Roy to describe the prevailing corrupt regime in which mining companies get the Home Ministry (whose staff includes former mining officials) to sign MOUs (Memoriums of Understanding). This will give the companies the “legal” right to plunder and pollute the land as well as the “right” to drive out the adivasis from their ancestral homes. The adivasis will then experience the joys of being enslaved to moneylenders and having their women sold like cattle to the flesh markets of India’s shinning cities. These adivasis will lose their language, culture, dignity, self-respect and learn to bow down before the will of upper-caste landlords. In other words, thousands of years after the first Aryan invasions, they will have earned the privilege of becoming Dalits. Their sacred ancestral lands will then become Mortuaries of Undertakers directed by the corporate offices and government bungalows of New Delhi.