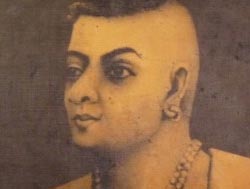 Panicker is still today perhaps the most revolutionary anti-caste leader of modern times. He was born in the 19th century as a member of the Ezhava caste, a so-called backward caste. The Ezhava were warriors who were for a long time stigmatised for refusing to renounce Buddhism. Nevertheless, they were valued by kings for their martial prowess. Seven feet tall, Panicker came from a family of warriors expert in the Kerala martial art of Kalaripayattu. He was educated in Sanskrit, Ayurveda and astrology in addition to martial arts. He also learned the theatrical art of kathakali and introduced it to his community to elevate its culture.

In the 1820s the government of Travancore in southern Kerala banned low-caste women from wearing cloths to cover their breasts. The protest movement against this draconian fatwa of upper-caste lechery lasted 50 years. Indian literature is replete with stories of so-called rishis and warriors raping adivasi women, the most famous being the mother of Krsna Dvaipayana Vyasa, who was the author of the Mahabharata. After thousands of years of Aryan rape and religious sex slavery (devadasi), this was the first protest against savarna sexual exploitation in Indian history. In the 1850s this protest movement erupted in Alappuzha District. Panicker took the step to demand that all Ezhava women of his district refuse to obey this order. Unlike other Ezhavas, he went further and distributed cloths to the Dalit women in Kayamkulam market. When outraged upper-caste Namboothiri men violated the modesty of Ezhava women by tearing away their upper clothing, Panicker killed them with his sword. This in itself was a revolution in the society.

Panicker then became determined to become independent of upper-caste religion. He went in disguise to the temple of Guruvayur. Ironically Guruvayur is sacred because it was visited by Lord Shiva, leader of the non-Aryan armies and the propagator of sama samaja. Panicker learned the temple rituals from the Brahmin priests, but when unmasked by outraged priests, he fought them off and escaped. Panicker then went to Goa and learned the temple rituals there. In 1854 Panicker built the first Hindu temple to Shiva open to all castes and tribes in Mangalathu village.

Panicker launched another protest movement to demand that low-caste women have the right to wear full-length lower garments. We can understand why Vivekananda called Kerala’s casteism the “madness of lunatic asylum.” Unfortunately Vivekananda (of ancestral backward caste origin) lost his dharma and sold out to casteism in his final writings. But dharmic heroes like Panicker went still further and won the right of low caste women to wear gold ornaments. This is not simply ancient history. In Tamil Nadu today, Dalits are beaten or killed for having a thin moustache, for riding a motorcycle in upper-caste areas and for having a film song dial tone on their cell phones.

Panicker also founded a school and library for his village of Attrapuzha to educate the lower castes. In January of 1874, while travelling by boat, Panicker was assassinated by a cowardly gang of upper-caste men in the silence of the night. While Panicker could not create an army to fight savarna oppression, and while he was unable to create a spiritual (rather than religious) revolution, the blazing splendour of his heroism still thrills the hearts of dharmic people today.

Next: Mahatma Phule and Savitribai Phule

One thought on “Caste Revolutions of Yesteryear: Arattupuzha Velayudha Pannicker”