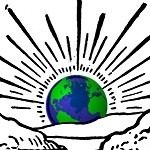 ~ The idea that progress is synonymous with economic growth and increasing consumption;
~ The notion that humankind is separate from nature, and that it is the human destiny to conquer nature—to use the natural environment as a resource for fulfilling human wants; and
~ The view that economic efficiency and scientific reductionism are the most trustworthy approaches to fulfilment of humanity’s goals.

Others, who have looked at the core values of western civilization, add to this list “mechanistic outlook,” which envisions a universe that is linear, mechanical, atomistic, and rigidly deterministic.

These complimentary and inter-meshing premises have shaped the western worldview, and this worldview has in turn spawned the civilizational leviathan that is destroying the balance of planetary life.

Emergence of a New Paradigm

It is just this task which has occupied some of our most visionary social thinkers. Marilyn Ferguson, in her book The Aquarian Conspiracy, surveyed the emergence of new paradigm thinking in diverse social disciplines. Fritjof Capra, in articulating a theoretical base for green politics, consciously grounded his thinking in a matrix of new paradigm premises. And Mark Satin, looking beyond the traditional liberal-conservative, socialist- capitalist dichotomous political framework, reported evidence of a coalescing “third force”—a political constituency which holds a decentralist-ecological-human growth perspective.

Ecophilosopher Arne Naess proposed two “ultimate norms” as cornerstones for the needed antithesis to the dominant ideology. These are: Self-realization and bio-centric equality. The Self- realization norm is derived from the central message of perennial philosophy—that the fundamental purpose of human existence is to realize our fundamental nature. Indian seer-philosopher P.R. Sarkar termed this our “human cardinal purpose” and explains its importance in these words:

“There is in the human being a thirst for limitlessness. It is impossible for limited objects to quench this thirst. The Great (Brahma) is the only limitless entity, so establishment in its bearing alone puts an end to all thirsts and cravings.”

From the stance of the Self-realization norm, materialism is fundamentally flawed, due to its inherently inability to satisfy deeper human longings. The perennial philosophy, by contrast, supports attainment of the Self-realized state, with its promise of profound fulfilment. Humanistic psychologist Abraham Maslow, in his study of peak experience, found that seers and mystics from many times and cultures report that the state of transcendence, of Oneness, experienced by Self-realized individuals brings deep peace and contentment.

The Self-realization norm also has relevance to social transformation. The purification and spiritual elevation of individuals is necessary if we are to create lasting social progress—a liberated society can only emerge from the liberated consciousness of individuals.

The second cornerstone of the post Marxist/capitalist worldview which Naess advocates is “bio-centric equality.” Poet Robinson Jeffers expressed the essence of this norm in his poem, “The Answer”: “Organic wholeness, the wholeness of life and things, the divine beauty of the universe. Love that, not man apart from that . . .”

Sarkar developed an analogous concept to bio-centric equality, which he termed “neohumanism.” Sarkar conveys the sentiment behind neohumanism in these words:

“Is humanity the summum bonum of existence? No, no, no, certainly not. The universe does not consist only of human beings; other creatures, other animals and plants, also have the right to live. Our universe is not only the universe of humans, but the universe of all—for all created entities, both animate and inanimate.”

Other material on Comparative, Prout: