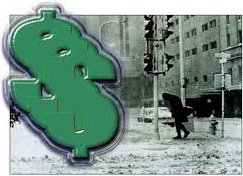 From the booklet PROUT, What It Stands For

It is preposterous to think of a lasting friendship between a goat and a tiger. Is there not some fallacy in mixed economy which tries to reconcile those two extreme systems? Rather it has been found that under the camouflage of socialism, with the inventions of newer technologies of exploitation, capitalism leads its secret but triumphant expeditions in society. Thus, mixed economy or democratic socialism in the ultimate analysis is but another name for capitalism, only a little veiled, so to say.

As a result of constant competition between the private and public sectors, the former makes ever increasing profits and thrives whereas the latter continue to incur recurrent losses and finally collapses. When attempts are made to reconcile the two it is but natural that the powerful one will definitely try to inflict a crushing defeat over its weaker counterpart. The mixed economy is not only ineffective and useless but also dangerous. It tends to deepen the frustration of humanity.