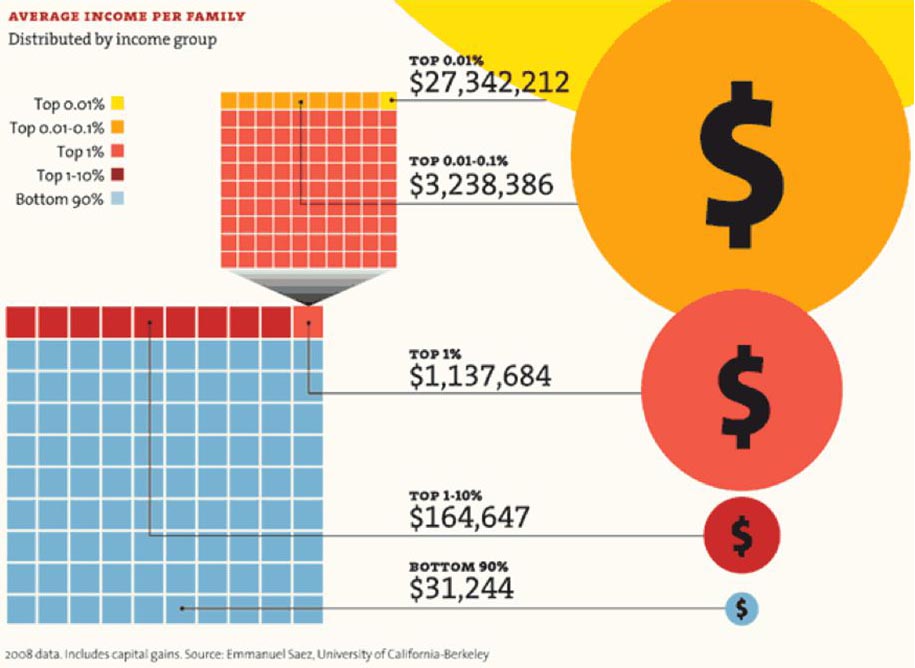 The above graph indicates the extreme wage gap in the USA, 2008. In the five years since, the gap has only increased. According to PROUT, the crisis of wealth concentration is the main cause of financial crises and severe economic downturns. Click for larger image.

(PROUT Globe, April 2015) – An overview presented by Realities Watch indicates that the USA dominates the world of individual-oriented capitalism by far. Among the 80 top global rich, Bill Gates and 35 other North American citizens (there is only one from Canada) boast personal fortunes totalling 963 billion US dollars. On the other hand, the richest individuals of the rest of the world boast a total of 949 billion dollars.

The two Chinese billionaires on the list, building entrepreneur Wang JianLin and Internet entrepreneur Ma Huateng, ranked respectively as 64 and 80, with a combined personal fortune of 28 billion dollars between them, just over a third of number one: Bill Gates.

Realities Watch writes that, “since the ‘financial repression,’ the most powerful people have only gotten more powerful. A 2013 Oxfam report found that 80 people had as much wealth as 1/2 of humanity, and a few months later Forbes said the number had dropped to 67. Many of us asked who exactly these people are, and now the list has been released.”

According to PROUT, wealth concentration has to be identified as the single most important cause of the global financial crisis and potentially more severe economic downturns in the near future.

The second cause of severe economic downturns identified by Sarkar is when money that is in the possession of individual or state capitalists stops rolling. “Money remains inert or unutilized because those capitalists think that if the money is allowed to roll freely then their profits will decrease, even though it will bring relief to the common masses.”

“List of 80 People With as Much Money as 1/2 of Humanity,” Realities Watch.

Other material on Centralisation of wealth: