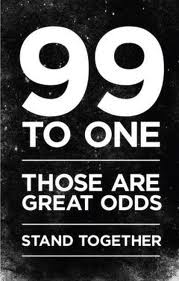 Ac. Krsnasevananda Avt.
Inequality is the issue of the day – the real cause behind the prolonged recession and a major contributing factor in social, environmental and ethical issues affecting societies all over the world. It is finally dawning upon the public (and even upon some economists) that if you keep increasing production capacity (by making people work longer for less) and reducing consumption capacity (by stagnating wages and increasing unemployment) you will eventually end up with lots of goods and no one to buy them – in other words, a recession or depression.

Public consciousness and anger about inequality is being clearly and increasingly expressed around the world. Coming out of genuine suffering it is one of the primary motivating factors behind the Arab Spring revolts, massive protests against corporate tax-dodging in the U.K., “indignation” protests in Greece, Spain, Portugal and Israel and now the “Occupy Wall Street” protests against corporate greed spreading accross the United States.

Although public anger at inequality is high there have been few, if any, new ideas about how to solve the problem. This post explains a number of mechanisms for controlling inequality put forward in the Progressive Utilization Theory (PROUT) of P.R. Sarkar.

The rich get richer and the poor get poorer

Inequality is essentially an unhealthy gap between rich and poor. In present day economies the normal means for minimizing this gap include welfare benefits, minimum wage, bargaining powers of workers and unions, progressive taxation, property taxes, capital gains taxes, company taxes, etc. Over the last 30 years we have seen all of these methods undergo steady changes which have been harmful for the poor and middle class and beneficial for the wealthy.

As Warren Buffet put it, the class war has been going on for the last 20 years and his class won. In order to safeguard the interests of the vast majority of the population, obviously stronger methods (and the political will to implement them) are needed.

Here are a few methods suggested by PROUT:

Applying these methods could bring many benefits in the following areas:

Through proper control of the wealth gap productive capacity and consumptive capacity will rise in tandem, i.e. “a tide which lifts all boats”. Everyone prospers. This is the essential factor in maintaining a healthy economy.

As the economy grows everyone’s purchasing capacity increases thus stimulating more demand, more production and more growth. If the above methods were applied (especially no. 1 and 2), the economic crisis would be ended overnight.

Notice that there is no need for welfare in this system. With jobs and a livable wage guaranteed no welfare will be required (other than for those who are unable to work for health or age reasons).

On the one hand, elimination of excessive wealth will help get rid of the financial instability caused by speculation. It will ensure that all wealth is used for productive purposes and no wealth sits idle in bank vaults benefitting no one. On the other hand, elimination of poverty and unemployment will ensure that the poor and uneducated will not be a drain on the economy, rather the productive capacities of all people will be put to maximum use.

A more equal society is a more united society. In both the social and work environment people will feel a closer family or team feeling. This will have enormous benefits socially as well as economically. 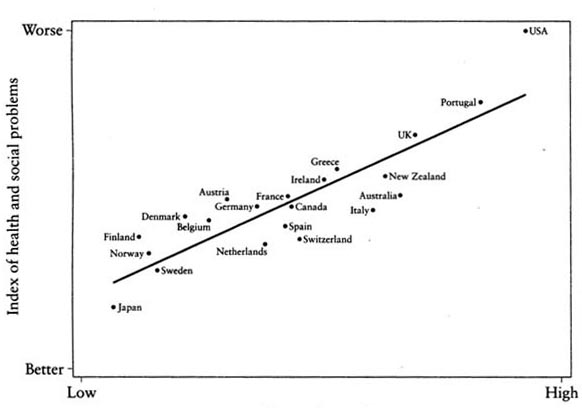 Less inequality will also help recapture democracy. No longer will wealthy individuals be able to purchase political decisions that favor a small minority of people, rather the government will stand a much better chance of protecting the actual needs of its people. In the workplace the cooperative mode of production will enhance worker participation and ensure that the needs of labor as well as capital are reflected in decision making.

People with little or no economic power are at a great disadvantage when it comes to protecting their environment. Conversely, with more equal economic power, the common people will have an equal voice in decisions affecting the local environment.

PROUT policies such as local control over the economy, decentralization and regional self-reliance will ensure that overcrowded cities and abandoned rural areas will become a thing of the past.

Unequal societies sooner or later are exploitative and oppressive in nature. Overworked and underpaid, burdened by fear and anxiety, the common people have little opportunity to develop their subtler human potential.

In an effort to dampen discontent the populace is drugged with media emphasizing violence and sex. Divide and rule policies are employed to cause the disenfranchised to war amongst each other thus distracting their attention from their real oppressors

In a society where the people are economically secure and prosperous, where the benefits of technology can be spread amongst all in the form of reduced working hours, such people will have sufficient comfort and security to develop their subtle potentialities. The prevailing atmosphere of co-ordinated cooperation will be conducive for emotional and spiritual growth.

To conclude, despite abundance of material wealth and sophisticated technology, we have been unable to create a society which offers security and happiness to our citizens. The people have run out of patience and we are on the border of global rebellion.

Our old methods have failed and something new is required which expresses a higher level of care and respect for each other and for the environment. The PROUT policies outlined above, aimed at the good and happiness of all, represent a comprehensive solution to this problem.

Other material on Centralisation of wealth, Socioeconomics: