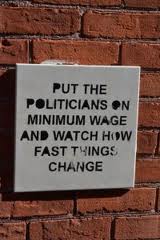 Economists have long wrestled with the question of how to achieve the most efficient output and distribution, in a way that is also equitable and fair. However, economic efficiency and fairness have generally been regarded as two separate issues. Many have argued that economists should not even consider equity at all.

“PROUT ensures an adequate “living wage” for every worker, and that extra amenities are provided for at a level that is fair and appropriate for society.”

The PROUT principle of atiriktam (the surplus available to society after the minimum necessities have been supplied to all) resolves this dilemma both logically and morally. PROUT asserts that the only justification for granting higher income to a person is to reward him or her for providing a greater benefit to society.

A higher salary may induce an individual to work harder or to improve his or her skills. However, there is a limit to the output any one person can achieve: personal capacity is limited, and there are only 24 hours in a day. Production may increase with material incentive up to a point, but cannot increase indefinitely. Inevitably the production curve levels off. After that peak, additional incentives will not increase the person’s productivity. In fact, further increases in income may actually decrease one’s productivity, as the individual decides he or she can afford more leisure.

This is based on a central principle of economics known as the Law of Diminishing Marginal Returns. Offering a salary raise that is a hundred times higher cannot induce any individual to work a hundred times harder or become a hundred times more efficient. Some individuals–such as corporation CEOs–are today earning salaries that are hundreds of times that of other employees. This reflects competitive bidding for their services rather than any valuation of their real worth.

Extremely high salaries are also paid to some players in professional sports. This is due to “free agency,” the legal right of players to join a different team when their current contract expires. When these rules were established in the United States and then in the European Union, salaries shot up. In the United States, in 2009 the average base salary of a professional National Football League player was about US$990,000,[1] and in 2010 the Major League Baseball player average exceeded US$3 million.[2] The UK Premier League football (soccer) average salary is equivalent to US $940,000.[3] Many sports stars are paid ten million dollars or more per year.

Some economists argue that these astronomical salaries reflect the revenues the stars earn for their teams. Many fans probably prefer that the extra money goes to the players rather than to the owners. Still, it cannot be demonstrated that the quality of play in these sports has improved. In other words, the higher salaries have had no incentive effect. It is unlikely that players would be lured to other careers if their income fell to the level of other professional salaries. From society’s standpoint, the higher salaries have little justification.

PROUT economist Ravi Batra devised the following system for distributing income, based on the principle of atiriktam (surplus wealth). In the following formula, A stands for atiriktam, NNP for net national product, L for labor force, and w for the real wage required for the minimum standard of living.

When the real wage–the adequate minimum salary needed to comfortably purchase the minimum necessities of life–is multiplied by everyone in the labor force, and this is subtracted from the total product of a nation or of an enterprise, the excess is the quantity of surplus atiriktam available for distribution as higher wages or incentives.[4]

Continuing from this formula, Mark Friedman has further developed an economic model which demonstrates the optimal level of compensation to achieve the maximum productivity. From society’s standpoint, any payment beyond that is wasted, and so society should apply those surplus resources to other purposes. The model provides the theoretical framework for statistical studies; it also allows individual enterprises to pinpoint their optimal individual wages.[5]

Thus PROUT ensures an adequate “living wage” for every worker, and that extra amenities are provided for at a level that is fair and appropriate for society. Most importantly, workers are valued and recognized for their unique contributions. Society benefits from the worker’s productivity, which is maintained at a high level.

In the case of socio-economic regions, Proutist economic boards will have to calculate the legal minimum salary for an individual and his or her family based on the cost of the minimum necessities in that area. This would be considerably higher than the current minimum wage in virtually every region of the world. Of course, the cost of living is cheaper in economically less developed regions, so the minimum salary can initially be expected to be set lower in those regions than in more developed countries.

The boards will then have to calculate, using Gross Domestic Product and other indicators, the surplus wealth presently produced by the economy–that is, the difference between the total national or regional income and the amount needed to provide the minimum wage. This information would enable the calculation of a maximum legal wage for the local economy. This ratio–between the minimum and maximum salaries–could be expected to be initially set higher in less developed regions, then gradually reduced as the standard of living and the overall quality of life improved.

For example, Norway has one of the highest standards of living (fourth in the world, according to the IMF, with US$52,238 GDP per capita) due in large part to its petroleum reserves and hydroelectric capacity. The United Nations ranked Norway first in the world in its 2010 Human Development Index listing. The country also has one of the lowest wage gaps in the world. The lowest salary for a Norwegian government employee in 2010 was US$36,000 annually (207,900 kroner, wage level 1), and the highest was US$192,000 (1,106,400 kroner, level 98), 5.3 times more.[6] By comparison, U.S. government federal employees have a 10 to 1 gap, starting at US$17,803 (General Schedule grade 1), and the highest is US$179,700 (Senior Executive Service).

PROUT economist and historian Edvard Mogstad, together with the think tank Bevegelsen for Sosialisme, assert that the egalitarianism of Scandinavia is the secret of its economic success and low unemployment. They propose a policy which ensures that nobody should earn less than half of the average income (which in 2010 was US$70,000), and the maximum wage should not be more than four times the median income. That gives a ratio of 8 to 1, which they feel is the widest acceptable for Europe. They also propose that constant effort should be made to lessen that gap.[7]

The requirement of a livelihood-level minimum wage would eliminate some under-paid, low-productivity jobs. For example, live-in domestic assistants in undeveloped countries are paid so little that most middle-class households have at least one, while in developed countries only the wealthy choose to pay the decent wages required for that service. A Proutist economy would no longer permit the exploitation of underpaid manual workers.

People with physical or mental disabilities, or who for any other reason are unable to do high-productivity work, would have their income subsidized or be employed in a public works project or some type of service cooperative. With the exception of social security for the elderly, a system of full employment would replace most of government’s welfare functions.

Keynesian economists will appreciate that raising the minimum wage would stimulate aggregate demand, thereby increasing output and creating more jobs. Several studies have shown that raising the minimum wage in a capitalist economy helps poor people, while causing a decrease in unemployment. The challenge for a Proutist society will be to continually improve people’s skills and competence through different types of education. It will also be necessary to encourage productivity through capital investment by making low-interest business loans available for cooperatives and the self-employed.