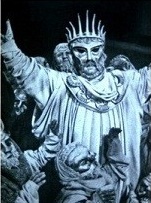 By Trond Overland
The Beauty of Greece, currently playing in Europe, tells the story of Lady Greece of noble heritage who has taken to prostitution because a gang leader she fell in love with, Capitalism, is really a pimp. When the scandal breaks, her family go out of their way to save their reputation. They publicly brand Greece as deranged to get her into mental hospital treatment, “until she no more embarrasses herself”, and they mortgage (“quanteeeeeease” the rather sickening pawnbroker calls it) the family jewels in order to finance her stay at a seriously expensive mad house. If they don’t, the family’s golden ass, Euro, will die – an oracle balefully informs us as the first act closes dramatically.

Greece’s dandy cousin, UK Cameron, decides early on in the second act that he will not take part in helping Greece. He delivers a line of classical proportions: “We are not member of the Euro zone, therefore we won’t pay,” thereby reserving a place for himself among theatre’s hypocritical greats. For it was not, as you will remember, Euro or Greece herself who brought shame on Greece; it was Capitalism who did it.

During a nocturnal meeting in a graveyard between UK Cameron’s three servants, Scotland, Ireland and Wales, we come to know that their lord is unbridled Capitalism’s secret lover, and that all other members of the ill-starred family have also come under Capitalism’s dark sway one way or another, even the hospital staff. Hope for Greece seems to be running out. The graveyard council culminates with Wales rushing in to announce the terrible news that Capitalism and UK Cameron are really half-brothers by the same mother, Greed, who is also the mother of Greece by Capitalism’s old servant, his “paternal uncle” Grab.

In the final act, Capitalism, drunk at a party in his pimp mansion, scorns Grab for being nothing but a poor servant. Grab, equally intoxicated and increasingly agitated, kills Capitalism who, as it turns out, is his own son. Gross Greeks.

The climatic last scene belongs to Grab. Hospitalised Greece has died of grief. Miserably alone in dead Capitalism’s mansion, Grab pulls out his own eyes, then tries the same with his ears but — newly self-blinded and severely disturbed by now — fails to succeed. The oracle’s ominous ramblings portending Euro’s gloomy fate grow increasingly loud as Grab, in the utter darkness that is now his life, inadvertently sets fire to the mansion and burns helplessly to death with the oracle’s words roaring in his ears.

Many in the audience are clearly agitated. “Let the golden donkey Euro go to hell!” some shout. A large lady shouts: “Down with the pimp!” Such loud-mouthing in the sacred temple of high drama may seem entirely out of place to some. We would rather welcome it and join in enthusiastically: “Give the EU structure more and more of a well-deserved thrashing!”

The EU was originally established as a post-WW2-euphoria “common market” and developed politically from there. But this copycat model of the US federation will never be able to work through its serious crises — because it doesn’t have to. The sovereign countries of Europe know only too well how to survive on their own. If anything, they have perfected crisis management for centuries and millennia.

Precious little common glue, except for financial purposes and mountains of related laws and regulations, has stuck together the European nations before or after entering into their unholy EU alliance. The cement that carries the US federation forward is Liberty — Enlightenment style individual freedom with a business twist. The EU capitalist project has no such ideological adhesive, other than a semblance of pan-Europeanism without any real substance to it.

A federation of states cannot be founded on commercial terms alone. A wide spectrum of socioeconomic elements and factors need to reach certain saturation- and maturation levels before a happy merger of the two can take place, not to speak of an entire continent. Prime among these factors is the common economic challenges of ordinary people, which was never an EU issue in the first place. From Day One, this thoroughly market-oriented business plan allowed for the free exchange of goods, services, labour and capital, which has nothing to do with common welfare but everything to do with big capitalist interests.

The Beauty of Greece is written by the corrupt outlook and decadent socioeconomic ethics of contemporary bureaucratic society, who indeed want to get back at Capitalism. The Greek civil servants simply would like to have their cut and have sought it in the system itself, not in financial markets that they are not particularly good at playing.

Their attitude, of skimming off the cream in the family pantry instead of being out milking the cows, if you like, does not sit well with many of their colleagues and equals in the other countries, especially not with those up in more prudish northern Europe. This alone shows that important factors for close cooperation across Europe, let alone a full continental merger, were not properly in place back then. When the mother of all democracies along with other opportunist capitalist forces of Europe entered into EU matrimony, none of them were ethically or practically ready for taking such a huge step.

We all long for unity and togetherness. Such are the expansive sentiments and tender feelings at the core of our universal being. Still, we cannot deny our local heart and soul. We do need to acknowledge and bring with us our respective cultural emphasis, proud legacy, peculiar traits, etc. into any sort of union — and start from there. The EU merger mania gambled on skipping a few too many such local fences and now has to pay for it with its currency, the Euro. The question is whether matters will end there.

So what is the moral of this particular Greek tragedy? Heritage has to be brought forward in its own dignified way, independent of external economic interests. Capitalism the pimp has no role to play in the welfare of local people.