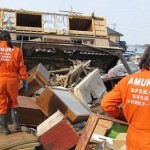 (In memory of those who suffered from the great tsunami on Dec. 27, 2004) – When a major quake hit the Turkish people in the summer of 2000, their traditional arch enemy, the people of Greece, responded with priceless aid. In the wake of the tsunamis that hit countries around the Indian Ocean, we shall once again see a surge of aid coming in from numerous countries that were not directly affected.

Unfortunately the governments in the region were so far not in position to do their basic duty, to establish a sound warning system in the same way as the Pacific rim is properly equipped. If such a working system had been in place around the Indian Ocean and the Bay of Bengal, a large number of the dead and affected from Indonesia to East Africa would probably have been saved.

More fundamentally, had the socio-economic and ecological balance of this coastal region been developed instead of being marginalized, natural forces would not so easily have gained the upper hand. Deforestation throughout the Bay of Bengal rim area has rendered northern parts of the Bay of Bengal acutely vulnerable to storms and hurricanes. Moreover massive removal of mangrove forest on water fronts has weakened nature’s shield against incoming flooding and rendered agricultural land saline and barren.

As a result millions of Bangladeshis have in recent years routinely suffered environmental destruction, death, disease, homelessness, and hunger due to the building up of seasonal winds over their home basin and incoming water. Only 50 years ago the situation was very different, as winds could not build up to that extent due to the presence of thick, calming forestation around the bay.

Natural disasters will still have to be dealt with in the way human beings are proud to be associated with: In unison. This is also a thought for permanent measures that should be implemented in the world’s poorest and most vulnerable countries: A global collective preventive effort that would pre-empt such future catastrophes of the type that we too easily label as natural but that are actually man-made.