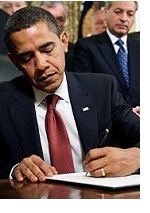 (June 14, 2010) – U.S. President Obama urged reluctant lawmakers on Saturday to quickly approve nearly $50 billion in emergency aid to state and local governments, saying the money is needed to avoid “massive layoffs of teachers, police and firefighters” and to support the still-fragile economic recovery.

This statement leaves us pondering yet again: Are the huge stimulus packages intended for saving banks really or most of all for keeping “teachers, police and firefighters”, your typical middle class proponents, in check by any means.

The worst thing that can happen to an elected politician is that his or her election platform proves useless and breaks down. In this regard the current U.S. President would be just another capitalist doing all he can to keep business going as usual. It will be some time more before we will see a US top politician who does not bow down to the capitalist class.