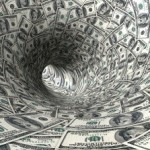 Safety worries have been raised about the assets of China, the largest holder of United States Treasury bonds, after Standard and Poor’s cut the rating on the U.S. sovereign debt from stable to negative.

Any reduction in rating increases the interest rate for US debt which in turn increases interest rates for everything in the USA — mortgages, bank loans, etc. No solution is in sight for the US ocean of debt, and the rating will probably be lowered even further.

The USA have been printing dollars to fund its budget and trade deficits, which has worked as an “upper hand” in the global market that has been unavailable to others. Reaganomics was funded on a mountain of printed dollars distributed throughout the world. At the moment more than $9 trillion are circulating and numbers are rising fast.

When China has been selling something to India, they have used US dollars as the means of transaction. In this way the world was absorbing US dollar paper notes. But in the very near future, the US may “go Greek” as other key countries will fully suspend the use of the US dollar in their mutual transactions.

Only 2-3 years ago any suggestion that the US economy would face such a crisis as the present would be met with ridicule. Likewise, only a couple of months ago nobody would have dreamt about the turmoil in Middle East & North African countries.

We live in a fast-changing world. Whatever will happen to it when financially-strapped USA and other leading NATO allies no longer will be able to afford costly random policing?

According to PROUT, the establishment of a democratic world government sustained by a neohumanistic constitution is the most viable answer.