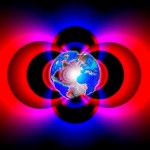 P.R. Sarkar
(May 31st, 1986, Kolkata) – The subject of today's discourse is, "The Poles Shift their Respective Positions." Cardinal human principles are almost unchangeable. I say almost unchangeable because they always maintain a tactual relationship with the cosmological order and so the cardinal human principles or cardinal points of human existence do not undergo any change or physical metamorphosis. But this is not the case with the physical body.

In the realm of physicality, in the arena of physical emanations, such a change may take place, and in the past took place several times in the history of this planet Earth, and also in the history of so many other planets, stars, satellites, nebula, etc. In the physical sphere change is the order of existence. In the psychic sphere, there is change in the collective structure, but because that change maintains a link with the cosmological order, with cosmic conation, it is not so prominent as that of the physical sphere. 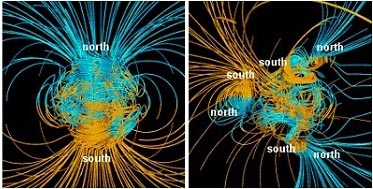 Between pole shifts the magnetic field is bipolar stable (left),
while during and around pole shifts it is multipolar unstable (right)

Take the case of our poles: The poles may shift their positions. In the past, such a shifting took place several times — in the annals of this planet and also in the history of so many other planets. As a result of this shifting, as a result of this changing, the people say that satellites moved in and out of this earth when its outer crust, its lithospherical body, was not so solid as it is now. And some are of the opinion that as a result of this emergence of the Earth's lithospherical body, the Pacific Ocean was created. According to old astronomy and also astrology, Mars also came out of this Earth, but it did not move around the Earth as its satellite. And that is why a name for Mars is Kuja: Shani raja Kuja mantrii (Saturn is the king, Mars is the minister). Ku means earth and Kuja means born out of ku. So in the physical sphere such a change took place in the past and will take place in the future.

The poles shift their positions. Now as a result of this shifting in the past, so many times, the time taken by the Earth in moving around itself varies, and also the time taken by the Earth in the moving around the sun — that is, its year — also changed. Day and night together were not of 24 hours, and the year was not of 365/366 days. So as a result of this change in polar positions, seasonal order also changed and its relationship with Mars varied so many times. And the order of our calendar, the system of our calendar had to be changed in the past. If the poles change their positions, the time taken by the Earth to move around itself will certainly be either lessened or increased. And similarly the time taken by the Earth in moving around the sun will either increase or decrease. That is why sometimes we see the seasonal orders are not maintaining proper adjustment with the months: this shows that the shifting is taking place fast. Now as result of this change, not only the adjustment between the months and the seasons will be lost, but the environmental order as well as the ecological order of the Earth will be disrupted. And as a result of this disruption, there must be physical and biological changes in the structures of all living bodies, all living creatures, including plants. The plants of Tertiary Age could not be found in the Craterian Age. The plants and animals of the Craterion Age could not be found in later ages, such as the Pliocene, Miocene, Obligocene, Mesazoic and Caenazoic Ages, because their existence, their births and deaths also depend on ecological balance. And as a result of the change in position of the poles, some people say that in the eastern hemisphere, the north pole is moving from north to south and in the western hemisphere, the south pole moves from south to north, and it cannot be assured that their relative distance will remain unchanged. So we should be prepared for the future; we should be prepared for the resultant of these changes in polar positions, in environmental order and also in ecological structure.

You know, human existence is not only an existence of physicality, an existence in physical structure, it is a mesh of vibrations of so many wavelengths. So if the physical waves change, if the climatic conditions undergo a certain gigantic metamorphosis, certainly the emanations and perceptions of nerve cells and nerve fibres will be changed, and disrupted. It may be for the good, it may be for the bad, but change is a must. In the case of such a change in the physical order and also in the physico-psychic order, the change is sure to take place in the realm of spirituality. We hope that the movement — that is, the movement of humanity, and of each and every living being — is from matter to consciousness, from extroversion to introversion. So the thought waves of human beings will be more of a spiritual nature than they are at present. That is, humanity in that developed condition will be more spiritual-minded than it is at present.

The Cosmic Entity, the Supreme Cognitive Faculty, never stops His emanations in the physical, metaphysical, supraphysical and spiritual strata. In the case of microcosm, if the change is neurological as a result of physical change, then certainly the cells and then nerve fibres will function some other way than at present. Then the thought waves of the Great, the thought waves of the Supreme Cognitive Faculty, are sure to undergo some transmutation when they pass through unit human structures. And it is expected that under such circumstances the progress of human beings in the realm of introversion will be more accelerated than it is at present. If the poles in a particular small planet, like the Earth, shift their respective positions, it may be beneficial to human beings or it may not be beneficial to human beings, but it is certain that the thought waves of the Supreme will do their own duty under the changed circumstances. Humanity will be more meditative and will accept  the Cosmic Cognitive Faculty, Parama Purusa, as its object of ideation in a better and more scientific way. One must not think that anything is fixed or stationary in this universe. Everybody moves — certainly the poles move — and they have already started their function of shifting their respective positions. And you see as a result of such a change, especially if the change takes place very fast, then another ice-age may occur here on this Earth. Between the pre-condition and post-condition of the ice-age there may be a long gap — that is, the pre-age and the post-age will have a long gap between them. But we have much expectation and hope from human intellect; and we hope, if a catastrophe comes, the human intellect will be able to overcome such a catastrophe and arrange for shifting the population to some other planet having suitable environmental conditions and a better ecological order. Let humanity rise, and let this development of humanity be more and more spiritually-oriented!

From: A Few Problems Solved Part 7