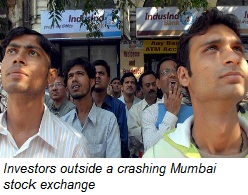 (28 May, 2011) – While Princeton professor Paul Krugman and his opponents are arguing whether severe austerities or hyper-spending is the way out of the present economic morass, the fact remains that the issue is not about quantity but quality. The fatal fault line that threatens to swallow the world runs deep within the financial system itself. The Mother of all Crashes, limited availability of physical wealth and its inability to satisfy the infinite human thirst, spells the end of profit-making as we know it.

To those for whom capitalism is everything, its collapse will indeed be the end of the world. For those of us who believe in a better life after capitalism — a world where human beings will be able to live with – and not – off each other — the turn of events hold opportunities for real growth in any sphere; physical, psychic, spiritual.

From the time of its inception more than 50 years ago, PROUT has announced the fall of Communism, Capitalism, as well as of religious fanaticism. No one should not be depressed at the fall of one such exploitative dogmatic system after the other but feel blessed to live in eventful, promising times!